SENSITIVITY TO PHAGE PREPARATIONS OF STAPHYLOCOCCI STRAINS, ISOLATED DURING DYSBIOSIS OF GASTROINTESTINAL DISEASE

Normal microflora is a necessary component of macroorganism, which ensures its effective functioning. Microbiome is not a stable group, but has the ability to maintain a dynamic equilibrium with the predominance of certain groups of saprophytic microorganisms in comparison with the implementation of the phenomenon of colonization resistance in order to prevent the pathogenic and pathogenic species from being infected on the biotope. A significant number of external factors can negatively affect on the dynamic balance between macroorganism and its microbiocenosis. Changes in the composition of microbial ecosystems of human body cavities with deviations from the norm are called dysbiosis. The most common is bowel dysbiosis. Today bacteriophages are considered as a safe and effective addition to the correction of the composition of the microbiota, because the high specificity of phages for specific microorganisms can solve the problem with the negative effects of a number of drugs, in particular antibiotics, on saprophytic bacteria. The aim of the researchwas to investigate the sensitivity of staphylococcal strains, isolated during dysbiosis to phages from drugs. The object of the studywas the sensitivity to the phage drugs of staphylococcal strains, isolated from adults with dysbiosis of the gastrointestinal tract. For isolated strains, identification for the species was conducted, their sensitivity to antibiotics and bacteriophages from commercial therapeutic agents was studied. Among the 52 samples of biological material from individuals suspected of dysbiosis, the presence of gram-positive cocci was confirmed in 88.4% of cases (46 specimens). The dominant group of staphylococcal microorganisms was found in 53.8% of cases (28 specimens), when they isolated in the highest number compared with other microorganisms. Thus, isolated isolates belonged to one of three types: the vast majority – to the species S. aureus(78,6%), much less – to the species S. epidermidis(7,1%) and S. saprophyticus(14,3%). As a result of the study of antibiotic susceptibility, it was found that none of the strains identified as S. aureus were polyresistant. For all strains of S. aureus, it has been shown that more than 72.7% of them were sensitive to all investigated drugs, which is a good prognostic sign for the treatment of patients. The least effective drugs were gentamicin, cefepime and ceftriaxone, to which 72.7% of isolates were susceptible. Of all the drugs, the most effective was gatifloxacin, to which more than 95.5% of isolates were susceptible. The greatest sensitivity to phages had isolates of S. aureus, at least 63.6% of which were sensitive to all used drugs. Among the phage drugs, the drug Staphylophage (bacteriophage staphylococcal polyvalent) was most effective: almost all isolated isolates of staphylococcus aureus (95.5%) were sensitive to it. Only 77.2% of isolates of S. aureuswere found to be phages of the Intesty-Phage, one of the most likely reason for this is that the drug is a mixture of phages against different bacteria and the overall proportion of staphylococcal phage is not large enough, which is typical for many phage. The sensitivity to the drug, sekstaphage has the smallest value – 63.6% of sensitive isolates, which is likely to be explained by previous considerations about the incomplete orientation of drugs against staphylococci. 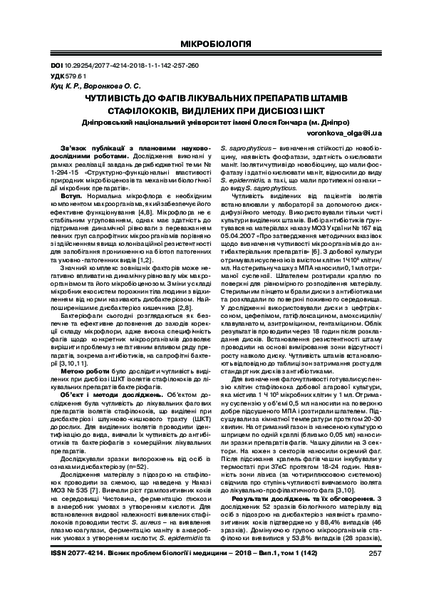