RESTRUCTURING OF BONE AROUND POLYLACTIDE ACID IMPLANTED INTO DEFECT OF DIAPHYSIS

Factors inherent in biodegradable implants affect its behaviour in the tissues of the body in connection with this, it is necessary to study the behaviour of biomaterials in bones in different conditions. Purpose of the study.To study biocompatibility and osteointegration of polylactide acid Ingeo™ Biopolymer 4032D in conditions of implantation into diaphyseal defects of femur bone. Object and Methods.Experimental studies were performed on 28 rats. Forward-lateral access to the middle third of the diaphysis of the right femur was used. After cutting the skin and dislodging the muscles using a dental bore, a standard whole defect with a diameter of 2 mm and a depth of 2 mm was modeled, followed by the implantation of biomaterial Ingeo™ Biopolymer 4032D in it. Animals were killed at 15, 30, 90 and 180 days. After histological procedures the material was examined under a microscope Olympus ВХ 63 (Carl Zeiss). Research results and discussion.At day 15 after of the histological study, the site of implantation of samples from polylactide acid in the diaphyseal femoral area was clearly determined. Implants were located in the cortex and immersed in the bone marrow channel. Virtually throughout the perimeter they were surrounded by a thin layer of immature bone tissue. Near the cortex there was the formation of a network of fine bone trabecula, both on the surface of implants and at a distance from it. In the areas of cortex adjacent to the implant, signs of remodeling have been identified. There were areas without cells and small resorbtive cavities. In the bone marrow in small areas the implant directly contacts the bone marrow or the new bone tissue, which separated the implant from the bone marrow with a thin layer. At day 30, the study of implants from the polylactide acid was densely located in the defect of the femur and surrounded by a thin layer of bone tissue of the lamellar type in the cortex and in the bone marrow. For the next term of the study, namely at 90 days, implants had small signs of degradation only in the regional departments. Throughout the perimeter of immersion in cortex and bone marrow, they were surrounded by lamellar bone tissue. In small areas, the density of the newly formed bone according to the strength characteristics differed from the maternal bone of the cortex surrounding the implant. In these zones, the formation of microcracks is revealed. In other areas, the implants were surrounded by bone tissue in the form of tapes. In the bone marrow into the implants there was preserved tape-like layers of bone tissue on the implant. On the 180th day implants were tightly located on the defect sites and were surrounded bone tissue. Implants were keep in shape, however, as in the previous study period, small areas of bone were found in marginal area of the implants, but no increase in the area of such sites compared to the previous period was found. In the cortex surrounding the implant, the boundaries between the newly formed bone and the maternal bone are not established. The implant was tightly embedded in the compact bone of the diaphysis. Implants from polylactide acid are biocompatible with bone tissue and have high osteointegrable qualities. Conclusion. Rebuilding cortex around the polylactide acid actively occurs mainly up to 90 days, implants were tightly surrounded by mature bone tissue, their complete degradation for 180 days was not detected. 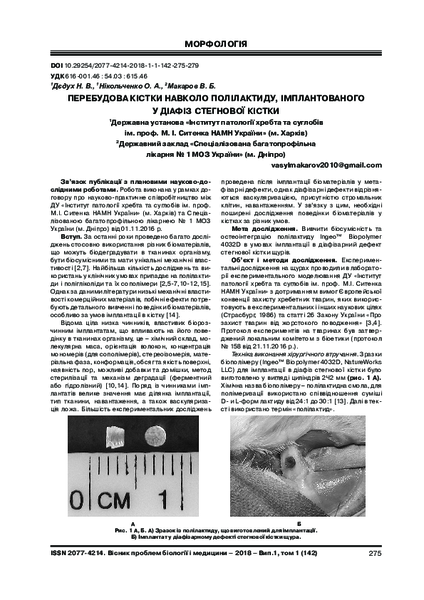