INDEX ASSESSMENT OF THE STATE OF PERIODONTAL TISSUES IN OVERWEIGHT CHILDREN

Periodontal disease remains one of the urgent problems of modern pediatric dentistry. The prevalence of periodontal tissue diseases among Ukrainian children is 70-80%, in some regions it is even more, up to 95-98%. Most often, lesions of periodontal tissues in childhood are diagnosed on the background of the general-somatic pathology. Nowadays overweight and obesity are the most common chronic disease in the world. On the background of overweight in the body of children there are a number of violations of metabolic processes, provoking chronic illness. The aim of research: assess the state of periodontal tissues in overweight children. Object and methods: complex surveys were carried out in 278 children with overweight. The comparison groups consisted of 292 normal-weight children and 89 obese children. The survey was conducted in key age groups 7, 12, 15 years in accordance with the recommendations of WHO at the bases of secondary schools in Lviv. The Shillera-Pisareva test, PMA index, CPI and the index of bleeding were determined to detect the inflammatory process and assess its intensity in the periodontal tissues. Research results and their discussion. Determination of the Schillera-Pisareva test showed that a positive reaction was found on average in 75,19±2,59% of overweight children, which was 1.1 times more than the clinically diagnosed inflammatory appearance (67,99±2,80%, p>0,05), in children with obesity it was found in 87,33±4,25%, which was 1,0 times more often than clinically diagnosed inflammatory appearance (83,15±3,97%, p>0,05) and accordingly in children with normal body weight (52,16±2,94%). Having analysed the Schillera-Pisareva test, it was found that in overweight children the test was positive 1,44 times more frequent than in children with normal body weight (52,16±2,94%) (p<0,001), however, it was in 1,2 times less than in obese children (87,33±4,25%), (p<0,05). The frequency of the positive test of Schillera-Pisareva grew with the increase in age and weight of the body in the examined children. It was found that the index of PMA in overweight children was 33,71±2,84%, in obese children – 37,28±3,13%, which corresponds to a moderate gingivitis, whereas in children with normal body mass the index was lower (24,59±2,52%) and it was characterized as a mild form of gingivitis. In order to detect early signs of inflammation in the periodontal tissues, the gingival bleeding index was used. According to the obtained data, the average gingival bleeding index in overweight children was 1,48 times higher than that of children in the comparison group (1,42±0,16 points versus 0,96±0.08 points, p<0,01), but in 1,23 times lower than in obese children (1,74±0,38 points, p> 0,05). In addition, for the assessment of the condition of periodontal tissues, the communal periodontal index-CPI was used but only the prevalence and intensity of bleeding gums were analysed. The obtained results indicated that the prevalence of gingival bleeding in children with normal body weight, on average, according to the CPI index, was 19,7%, which corresponded to the low level (with an affection to 0,5 sextant). In overweight children, the proportion of children with gingival bleeding was 28,8%, in obese children – 31,8%, which corresponded to a moderate level, according to the criterion of CPI (with up to 1,5 sextant being affected). 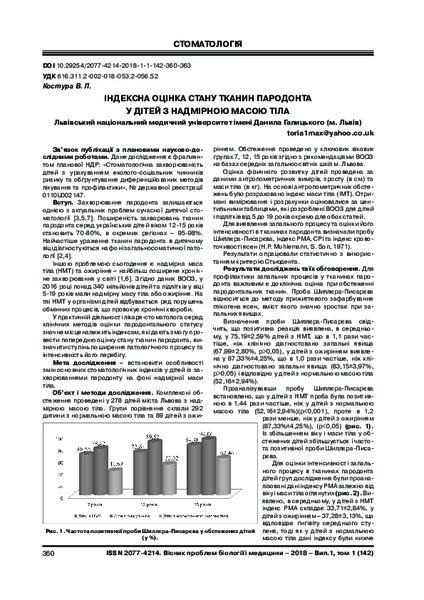