Bulletin of problems biology and medicine / Issue 1 Part 1 (148), 2019 / PROSPECTS FOR THE TREATMENT OF PROSTATITIS AND BENIGN ADENOMA WITH CIDIPOL, BASED ON NEW DATA ABOUT METABOLISM OF CIMINAL TO NITROGEN OXIDE (NO) AND NO-THERAPY ACHIEVEMENTS
Kravchenko V. G., Ivanov L. V., Shcherbak O. V.


PROSPECTS FOR THE TREATMENT OF PROSTATITIS AND BENIGN ADENOMA WITH CIDIPOL, BASED ON NEW DATA ABOUT METABOLISM OF CIMINAL TO NITROGEN OXIDE (NO) AND NO-THERAPY ACHIEVEMENTS

Сurrently, in the treatment of chronic prostatitis and hyperplastic prostate processes, a large number of drugs, circuits and methods are used that do not always produce the desired results. In our previous study (18), the use of rectal administration of the preparation Cidipol for the treatment of prostatitis was suggested by careful extrapolation of the pharmacokinetics features of two low molecular weight, lipophilic, antimicrobial pharmaceutics – Ciminalum and Nitazole containing a nitroxyl group in its molecule. This made it possible to determine the main characteristics of the antimicrobial drug substance, the method of administration of drugs, the pharmacokinetic profile and parameters of pharmacokinetics, the composition of pharmaceutical adjuvants and the type of dosage form for the alleged successful treatment of prostatitis. In recent decades, the phenomenon of nitrogen oxide (NO) is actively considered as a powerful, although not fully elucidated medical-therapeutic reserve in the treatment of many diseases reserve in the treatment of many diseases. The purpose of this work is to analyse not only the possible positive effect of the NO – metabolite of Ciminalum on its pharmacokinetic profile, but also the effect of its NO – metabolite on various types of pharmacological activity when rectally administered for the treatment of prostatitis. This would have led to a significant increase in the evaluation of the efficacy of the drug Cidipol and to expand the spectrum of its pharmacological effects in combination with NO in the treatment of both prostatitis and other pathological processes in the rectum. Results and discussion. From the point of view of pharmacokinetics, Cidipol occurred to be a unique preparation, since when rectally used, in blood plasma, to our mind, both antimicrobial active pharmaceutical ingredient Ciminalum and its metabolic vasodilator NO present at the same time, which increases the bioavailability of Ciminalum in the systemic flow and adjacent tissue in the process of its metabolism. The presence in blood and pathologically altered adjacent tissues (urethra, prostate and rectum tissue) of the vasodilator and disaggregator of platelet NO allows the drug’s components (Ciminalum and its metabolite NO) to quickly and effectively penetrate into abovementioned substrates and to realize its pharmacological action. After rectal administration of cidipol, a fairly rapid appearance of the NO metabolite in the systemic circulation was detected, resulting in a vasodilator effect in the pelvic organs and a further noticeable increase in the concentration of Ciminalum in the systemic circulation (central chamber). It was also established to increase the level of the ascending branch and prolongation of the process of absorption of cinnamal, increase of the presence of the drug in pathologically altered tissues with manifestations of anti-inflammatory, reparative and antiandrogenic action. Conclusions. The preparation Cidipol is a pharmaceutical system, when being applied rectally, simultaneously presents in the blood plasma both as antimicrobial pharmaceutical Ciminalum and its metabolic vasodilator and platelets disaggregator NO, which increases the bioavailability of Ciminalum in the system flow and in adjacent tissues in the process of its metabolism. This makes it possible to quickly and efficiently penetration of the drug into pathological substrates and realize its pharmacological action. 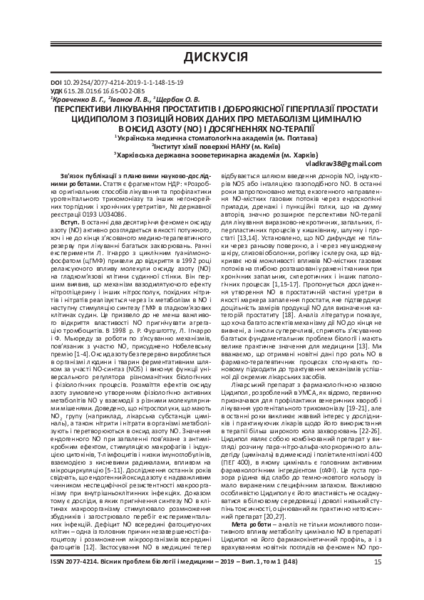