COMPLIANCE WITH TREATMENT OF PATIENTS WITH ISCHEMIC HEART DISEASE, AS THE MOST EFFECTIVE PREVENTIVE FACTOR

Cardiovascular diseases are the main reason of mortality in modern society, the leading part of which is ischemic heart disease (IHD). The prevention of health organization practically in all countries around the word, including Ukraine, is the key direction of decreasing mortality from cardiovascular diseases. Patient’s compliance with prescribed treatment is the factor which greatly, determines it efficiency, so, increasing the degree of following to recommendations is the actual problem. The low compliance with prescribed treatment is very dangerous leading by many reasons. Firstly, it fraught with serious complications, secondly it promotes disease progression and as consequence cause disability and mortality of able-bodied and social active people. The purpose of research is to study compliance with treatment and recommendations which have been given for patients with IHD. Object and methods of research. With the aim of research was examined 127 patients, age from 43 to 88 years, with ischemic heart disease: stable angina pectoris functional class III-IV in combination with hypertension heart disease stage III, circulatory failure stage I-II, diffuse and post-infarction cardiosclerosis (last myocardial infarction was from 6 months to 1,5 years ago).Results and consideration of research. According to European society of cardiology guidelines 2006 y. regarding of pharmacotherapy to improvement of prognosis of this patients categories which are grounded on evidence based medicine (levels of evidence 1A) using certain algorithm: aspirin 75 mg per day for all patients without special contraindications statins, ACE inhibitor, β-blockers. Conducted research has shown that patients with IHD don’t know about their disease and all inherent risks, due to this fact, many of them underestimate the seriousness of their disease and don’t follow to the physician’s recommendations. Thus, the patients take more often β-blockers (47,1%), acetylsalicylic acid (58,8%), ACE inhibitor (40,3%), statins (15,2%). Compliance with taking β-blockers and ACE inhibitor is ground on antianginal and hypotension effects of drugs. Statins has recommended themselves as drugs which decreasing of morbidity and mortality due to atherosclerosis, firstly from IHD and cerebral stroke. There are evidences, which show that statins can slow down the progression of atherosclerosis and causing decreasing the frequency of cardiovascular complications, due to different clinical cases. On the other hand, positive potential, which was shown by drugs of this group, can’t be realized fully, due to non-effectively using of it and non-adequate doses. Breaking of doctor’s recommendations by patients cause the most cases of hospitalizations both women and men. In the summer of 2018, European Society of Cardiology (ESC) and European Society of Hypertension (ECH) gave new recommendations about management of arterial hypertension, where was accentuated the importance of compliance assessment, because lack of patient’s compliance with prescribed treatment, is the main reason of unsatisfactorily blood pressure’s control. According to patients, most of them have domestic tonometer (in the presence of IHD p < 0,05). Herewith 49% of had been measuring blood pressure every day, around 17% of patients 1-2 times per week, 28% told that they did it only when they feel bad, 5% did it very rarely, 1% didn’t do it at all. Physical activity influences the reduction of blood pressure, improvement the blood circulation, reduction cholesterol levels and thrombosis. To achieve the antihypertensive effect the patients have to do a regular moderate aerobic exercises. According to result of surveying, young and middle-aged women as well as men of elderly and oldest ages tend to physical activity. Only 15% of women and 27% of men were informed about significance fact like as taking the alcohol for AH progression and 11% of women and 21% of men about causing angina pectoris/myocardial infarction. In accordance with the data of the conducted research in the questionnaire of anamnesis of life, it was revealed, that men abused alcohol more than women (drink above specified rate). And all of them temporarily stopped drinking alcohol for the time of angina pectoris attacks, hypertensive crise and its complications. According to our results, 39% of females and 25% of males do not follow the diet and do not care about their weight. Also, we revealed significant gender differences: women have a higher compliance to treatment, they trust doctors and are interested in additional information about diseases, while the majority of men have the anosognostic reaction. Conclusions. The conducted research has showed, that knowledge about the disease and its complications among patients with coronary heart disease remains insufficient, therefore many patients underestimate the seriousness of the disease and do not follow all doctors’ recommendations. As a result, it causes more hospitalization for both men and women. Thus, doctors should do more than just the appointment of a standard treatment regimen. Doctors should be able to convince patients that his health and life depend on how accurately he will follow the recommendations. It is important to understand, that the results of researches and registers indicate about decreasing in the survival of patients with non-compliance with the therapy. It is not just numbers, but the amount of lives that were lost because of the disparaging attitude to the standards of treatment. 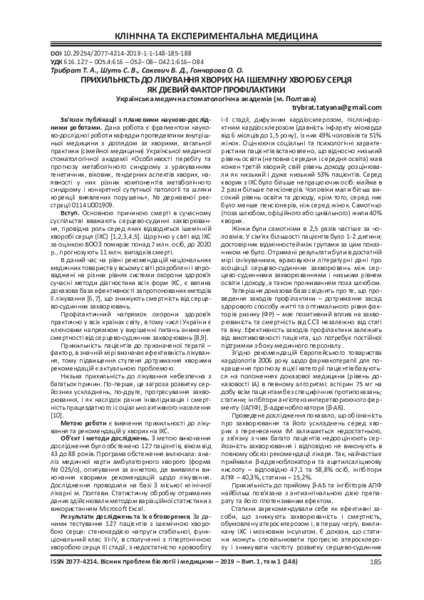