The species composition of the microflora of the genitourinary system of women is normal and in association with viral agents in pathological changes. For carrying out of experiments, women aged 18 to 60 years were examined by culture method and using PCR with real-time results detection. According to the results of the survey, it was found that among 395 women in 134 women foundnormocytosis and in 261 women – dysbiosis of the urogenital tract, while there was a rapid decrease in the useful representatives of the genus Lactobacillus spp. It has been shown that in women with objective and subjective symptoms of UGT in the first age group, the main etiologic agents are Ureaplasma urealyticum (14%), Gardnerela vaginalis (13.2%), and microorganisms such as Candida alb. (14.8%), S. agalactiae (9.25%) and E. coli— 8.3%. In women aged 26-45, the main pathogens are also classical vaginosis Ureaplasma urealyticum— 15.6% and Gardnerela vaginalis – 11.75%, and facultative-anaerobic and aerobic microflora – Candida alb. – 16.2%, K. pneumonia – 11.6% and E. coli – 9.4%. With age, the level of estrogen and the amount of lactobacilli decrease, which leads to a gradual increase in pH to neutral, which stimulates the increase in the number of yeast-like fungi and contamination by microorganisms of the intestinal and coccal groups. That is, in women of this group candidiasis develops due to the presence of mixed flora and dysbiotic disorders. Therefore, in the age group of 46-60 years, compared with the previous one, the frequency of isolation of clinical isolates Candida alb. – 12.6%, E. coli— 12.1% and K. pneumoniae— 11.45% increase. Most commonly, they were isolated among the studied group of women: Human Papilloma Virus of High Oncogenic Risk (HPV VOR) —types 16, 18, 31, 33, 35, 39, 45, 52, 58, 59, 67 (37.2%), Ureaplasma (urealiticum + parvum) in clinically significant amounts > 104— 19.5%, Candida spp. in the number > 103— 12.8%, Cytomegalovirus (CMV) 8.1%, Chlamydia trachomatis— 6%, Herpes Simplex virus (HSV1.2) – 5.3%, Trichomonas vaginalis – 4.8%, Mycoplasma hominis in quantities > 104— 3.5% and Neisseria gonorrhoeae – 2.8%. It has been shown that in the vast majority of cases (58%) the pathogens were detected in the form of the association of several microorganisms, it should be noted that the highest percentage was the association of bacteria with viral nature agents (32%) and bacteria with yeast-like fungi of the genus Candida spp. (26%). Monoinfection of viral etiology (18%), mainly represented by HPV VOR. It was noted that among all types 16, 18, 39 and 31 (26.3%, 15.7%, 11.6% and 10.1% respectively) were identified more frequently. In the course of our research, the most commonly detected human papillomavirus 16 and 18 types, which coincides with the results of the authors of other studies. The experimental data obtained are of practical interest since they can be used for further study of the ratio of opportunistic, pathogenic microflora and reproductive system viruses of women, for the development of preventive and curative measures, and prevention of excretion of urogenital infections and pathologies of reproductive function of women. 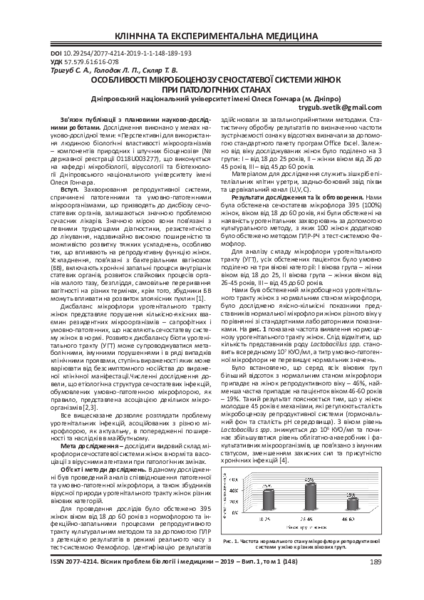