The effect of eye drops of phloxal (onloxacin, benzalkonium chloride), okodek (0.2 mg/ml, decametoxin) on the morphology of the organs and internal parenchymal organs (heart, liver, kidney) was investigated in 10 rabbits. Medicinal forms of eye drops ofloxacin, decamethoxin are used to treat inflammatory processes of conjunctiva, eyelids, cornea, vascular envelope of the eye; prophylaxis of purulent-inflammatory complications before and after operations on the organ of vision. Kerototoxicity, reduction of corneal epithelization, dystrophic changes in the eye because of the influence of quinolones have been confirmed in a number of publications, which were conducted comparing the results obtained at different conditions. Further study of this problem remains relevant and important for medical practice. The purpose of the study was to determine the effect of eye drops 0.2 mg/ml decamethoxin, ofloxacin (3 mg/ ml) with preservative benzalkonium chloride on macroorganism. Animals drowned for 10 days four times a day (8 at a.m., 12 at a.m., 16 at p.m., 20 at p.m.). Experiments on animals were carried out in accordance with the basic bioethical norms, the Law of Ukraine «On the Protection of Animals from Cruel Treatment» of December 13, 2006 № 3447-15, the Decree «Medicines. Good Laboratory Practice», approved by the order of the Ministry of Health of Ukraine dated February 16, 2009 No. 95, taking into account the norms applicable in international practice. Statistical processing of numerical results was carried out in the standard package of applications for medical and biological researches Microsoft Office Excel 2007. It was established that the vast majority of eye antimicrobial droplets that are marketed in the Ukrainian pharmacy market contain benzalkonium chloride as preservative, which may have a negative effect on eye tissue, and internal parenchymatous organs. This important fact is expedient to study on animals in comparison with quinolones eye drops of, which do not contain preservatives in its composition. Histologic studies have shown that the epithelium of the cornea of animals in the anterior chamber of the eye is represented by a multilayered flat non-corneal. The number of cell layers was 5-6. Epithelium of the cornea in its boundary zone gradually passed into the conjunctival epithelium. In timely matter of the cornea, isolated vagus lymphocytes were detected. Under the epithelium of the cornea, a well-developed basal membrane, a fibrillar structure with a thickness of about 7-8 microns, was found. The density of the fibroblasts in the bulk of the stroma was 819 cells/mm2. On its own substance was a homogeneous amphophilic descemetal membrane with a thickness of 0.03 mm. The sclera was a dense connective tissue wall with thickness of 0.2-0.3 mm in the posterior part of the organ, and 0.5 mm in the cornea of the limb, which consisted of parallel collagen fibers. In the sclera near the site of the optic nerve, a significant amount of memanocytes has taken place. In the second experimental group, 10 days after the inoculation of okodek eye drops, on the histological preparation revealed thickening of the epithelial layer due to the actively proliferative basal structure, and presence of a slight epithelium swelling in the form of vacuolation. Eye drops of floxal (3 mg/ml ofloxacin with benzalkonium chloride) were used in the third experimental group. In this group, on the basis of histological analysis for 10 days found significant edema of the epithelium and its own substance; epithelium vacuolation, swelling and fiber bundle, chaotic location of newly formed fibers. The outer epithelium was significantly thickened and consisted of 13-15 layers of cells because of its proliferation. The cells were located in disorder of layers certification. In myocardium, muscle fibers were well expressed. Longitudinal and transverse striation has been preserved. The nuclei of cardiomyocytes were of round form, normochromic. Coronary blood vessels were with ordinary blood filling. The peri-cellular connective tissue is not enlarged. The endocardium retains the usual structure. The structure of the epicardium is not affected. The structure of the liver is undisturbed. Liver beams have a typical radial arrangement. Hepatocytes were of normal size. The cytoplasm of most hepatocytes was fine-grained. We often found dual-core hepatocytes, which indicate high regenerative capacity of the body. There were found a vein, an artery and a bile duct in portal tracts. The microscopic structure of the kidney is not disturbed. The kidneys nephrons were in correct form. Bowman capsule demonstrated the usual structure. Stroma of the kidney was without pathological changes. It has been proved that eye drops of okodek (0.2 mg/ml of decamethoxin) did not cause irritating negative effects on the eye tissues, and dystrophic and inflammatory changes in the structure of internal parenchymal organs (heart, liver, kidneys) of animals. The drug floxal (3 mg/ml ofloxacin with preservative benzalkonium chloride), did not irritate eye tissue, liver, kidney, did not cause dystrophic and inflammatory changes. 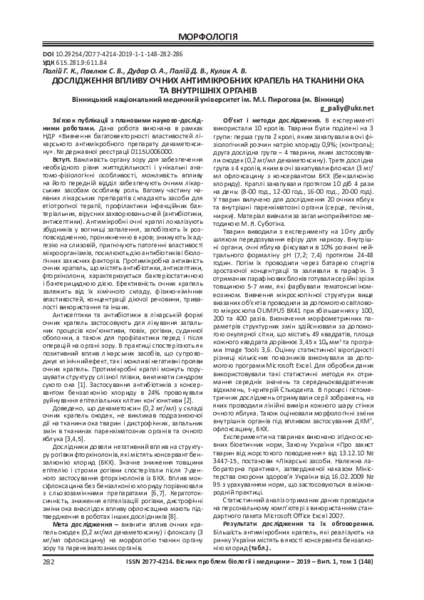