Aim: investigation the changes in blood microcirculation processes after injections of doxorubicin and evaluate the effectiveness of using thiotriazoline, ubiquinone-10 and EPM-Mg complex as metabolic correctional drugs to prevent the negative effect of doxorubicin treatment. Object and methods. The object of the study was white rats, divided into 4 groups depending on which drugs were used: І – doxorubicin, ІІ – doxorubicin and thiotriazoline, ІІІ – doxorubicin and qudesan, ІV – doxorubicin and EPM-Mg complex. Doxorubicin was administered intramuscularly 1 time per week for three weeks, metabolic correctional drugs – orally, daily, for three weeks from the time of the first doxorubicin administration. The state of capillary blood flow was assessed from the results of laser Doppler flowmetry (LDF) using a LAKK-01 laser analyzer of surface capillary blood flow. During the experiment, records of LDF-gram were made three times: first – before drug administration (these indicators were used as control values), second – after a week of experiment, third – after three weeks. Results. Doxorubicin intake for one and three weeks caused a decrease microcirculatory parameter (MP), coefficient of variation (CV) and indicators of average amplitude of physiologically most significant oscillations in blood flow of experimental animals. Intake of thiotriazoline and doxorubicin for a three weeks led to an increase of PM and CV by 5,5% and 68,8%, respectively. The use of ubiquinone (3rd group) and EPM-Mg complex (4th group) led to an increase the microcirculatory parameter by 2,2 and 3,9 times, respectively, and an increase of CV by 50% and 66.7%, respectively. Indicators of the average amplitude of blood oscillations after three weeks of the experiment in the second and third groups were slightly higher than before the start of medication. In the fourth group, the average amplitude of the studied blood oscillations, with the exception of pulse waves, after three weeks was at the level of reference values. Conclusion. It was found that doxorubicin administration cause disturbances in the microcirculatory processes, such as inhibition of the active mechanisms of regulation of tissue blood flow and blood stasis. The use of metabolic correctional drugs, among which thiotriazoline was the most effective, helped to reduce the negative effect of doxorubicin on the blood microcirculation of rats. 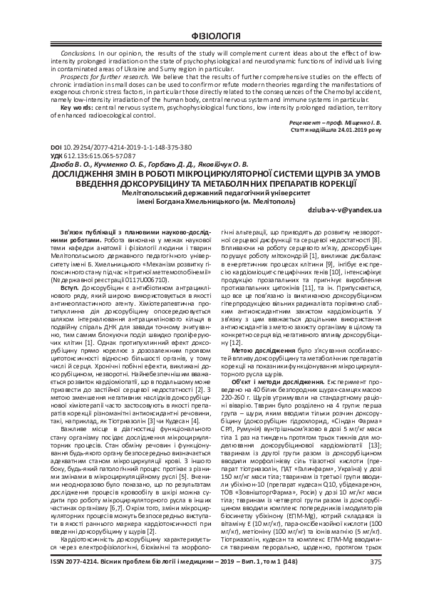