Bulletin of problems biology and medicine / Issue 1 Part 2 (149), 2019 / SIGNIFICANCE OF MICROELEMENTS CERIUM AND GERMANIUM FOR SUPPORT OF THE MORPHO-FUNCTIONAL STATUS OF THE ORGANISM
Halperin O. I., Rudenko K. A., Pridyus I. O., Kaplunenko A. M., Frolova G. M.

Biotechnological preparations, which include microelements, which according to the results of researches of many scientists carry out a number of vital functions in the body, are quite promising. Among the problems developed in modern morphology of the fundamental and applied nature, the attention of researchers is attracted by the study of the laws of the course of basic processes of morphogenesis and organogenesis under the influence of trace elements. Cerium and its compounds are an important trace element for the body and modern studies on the influence of this metal and its nanofocus on the body are conducted quite actively. It has been experimentally determined that the unique property of cerium dioxide nanoparticles is the ability to regenerate their restorative properties in a biological environment. Of particular interest is the use of cerium dioxide as a prophylactic in the treatment of radiotherapy for cancer, which protects against radiation damage, reduces the production of free forms of oxygen and increases the expression of superoxide dismutase. Studies have shown that the proliferation and growth of stem cells on the substrate containing the CeO2 nanoparticles was much better than to the non-filled or to the substrate containing any other oxide filler. Its specific physical and chemical properties allow to optimize the nature of the flow of intracellular reactions, thus providing a range of protective effects. The data obtained in mice provided additional evidence of the positive effect of cerium nanoparticles, in nanoparticles of cerium in old mice, protecting ovarian cells from oxidative damage, which results in an increase in the quantitative rates of litter in old calf mice. Administration of calcium in old males at a dose of 1 mg/kg over a period of 10 days greatly increases the level of testosterone, the quantity of sperm and the number of calves in the inflorescence. In vitro cardiac fibroblasts incubation with 100 nM cerium leads to an increase in the synthesis of RNA, but the rate of DNA synthesis does not change. However, researchers note that higher concentrations of cerium in the environment had an inhibitory effect. An analysis of experimental results has shown that cerium at low levels can act at the transcription level to stimulate the synthesis of collagen and protein, which, in turn, can contribute to the accumulation of collagen in endocardial fibrosis. Introduction of germanium citrate to female rats 30 days before fertilization and during pregnancy and lactation induces leads to multiple fertility, increased viability and the amount of survived rodents compared to control. It is proved that germanium possesses immunostimulant, antioxidant, antihypertensive, anti-inflammatory and analgesic properties. Analysis of scientific published data showed that cerium and germanium are important for the organism as trace elements, and the study of the influence of these metals on the body is carried out quite actively and, undoubtedly, is a promising area of research in biology and medicine. However, the information on the influence of cerium and germanium compounds on embryogenesis and cardiogenesis and their interaction in an organism with compounds of heavy metals remains unclear in the scientific world literature. 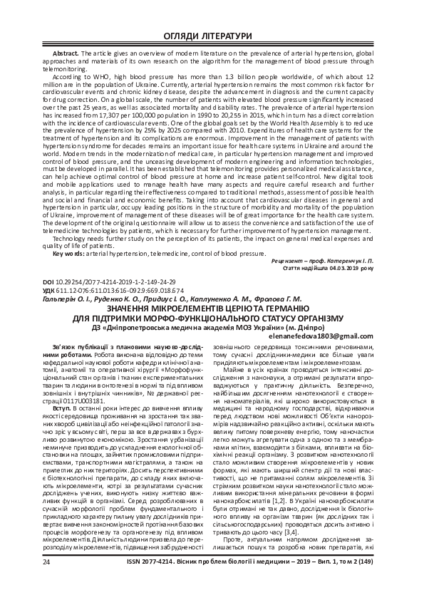