Bulletin of problems biology and medicine / Issue 1 Part 2 (149), 2019 / CRISPR/CAS – ADAPTIVE IMMUNE SYSTEM IN THE BATTERIES AND THE PENOMENES OF ITS APPLICATION IN THE EDITING OF GENES
Soroka D. S., Sokolova I. Y., Gavrilyuk V. G., Sklyar T. V

Today CRISPR / Cas9 technology is considered a significant breakthrough in biology, since it allows highprecision, cost-effective and quick editing, knock-out and cutting of genes and even genes. For the first time, the CRISPR locus, which is a repeat genetic element separated by variable spacers, was invented in the E. coli genome in 1987 by a group of Japanese scientists led by Yoshizuki Isino at the University of Osaka (Journal of bacteriology, 1989). In 1993, the same genetic elements were discovered by the Spanish researcher F. Mojica in the genome of the Archaea Haloferax mediterranei and named their DNA Clustered Regularly Interspaced Short Palindromic Repeats. Until 2000, Mojica found their presence in 20 microorganisms, including Yersinia pestis. It has been found that the CRISPR locus is part of an unknown mechanism that aims to protect against foreign DNA and is an expression of the adaptive immunity of microorganisms against viruses. Typical CRISPR locus consist of several direct replays separated by spacers – regions of variable DNA sequences. The CRISPR repeat contains 23-47 pairs of bases, and the spacer is 21-72 pairs. The number of “repeat / spacer” groups can reach 375, but often less than 50. The bacteria usually contain several CRISPR loci. Each locus provides protection against a particular virus. In the archaea, Methanocaldococcus jannaschii identified 18 loci (1% genome). CRISPRs are in the chromosome or in the plasmid DNA. In 2002, the operon with cas-genes in CRISPR locus were also discovered. They encode the synthesis of Casproteins – enzymes involved in the splitting of foreign DNA of viruses. Each Cas-protein carries several domains: typical nucleases, helicase, polymerases, DNA-binding proteins. This Cas-proteins are polyfunctional and capable of performing all of these enzymes. The Cas9 protein isolated from Streptococcus pyogenes cells consists of 5 domains (REC I, REC II, HNH, RuvC, RAM) and the additional Bridge Helix. Rec I is responsible for binding RNA Guide, REC II has not yet been sufficiently studied; Bridge Helix initiates DNA splitting when bound to a target DNA. The PAM-interacting domain provides the specificity of PAM and is responsible for binding to a specific DNA target. HNH and RuvC are endonucleases domains that cut the DNA. An important role in the recognition of foreign DNA by the CRISPR system is played by the RNA Guide. It, due to complementarity with the Target DNA, forms a duplex, which is recognized by the Cas9 protein and cleaved by its endonuclease activity. Cas9 allows the cleavage of any nucleotide sequence. The selectivity of Cas9 is a consequence of the complementarity of the RNA guide and DNA target. The mechanism for the formation of adaptive immunity under the action of CRISPR/Cas-system in invasion of viral or plasmid DNA into S. aureus cell involves two main stages – A and B. At stage A (Immunization) Cas2 is activated and splits the foreign DNA. A new spacer is created – a fragment of viral DNA inserted in the CRISPR cassette. When a virus hits the bacterium again (stage B – Immunity), transcription is carried out on the matrix of CRISPR cassettes with formation of mRNA, which carries information about all cassette spacers. As a result of processing under action of Cas2 mRNA is hydrolyzed with formation of individual RNA molecules, among which there is already a RNA-guide to detect the virus that penetrated the cell. With help of a specific RNA guide, Cas1 targets the viral DNA, cause it degradation. The CRISPR/Cas not only provides adaptive immunity against alien genetic elements, but also acts as a limiter for the horizontal transfer of viruses, plasmids, transposons between different bacterial cells. CRISPR/Cas methods are used in genetic engineering of eukaryotes and prokaryotes. Thus a new variety of rice was obtained, whose sprouts look like dwarf albinos. The possibilities of introducing CRISPR/Cas systems into cultivated plants for the creation of antiviral immunity are explored. Also, the attempts to edit genomes of pigs, cattle, monkeys, mice, bees. The results of the experiment, in which 62 endogenous retroviruses were inactivated with the help of CRISPR/Cas technology in the pig genome, were published. Thanks to these results, in the future, xenotransplantation of organs from pig to person will be possible. Methods based on CRISPR/Cas9 can also be used in medicine for treatment of various diseases: viral, immune, oncological, cardiovascular, hereditary, including Down’s syndrome, sickle cell anemia, pigment retinitis, β-thalassemia and others. In 2013 there was a publication about editing an abnormal gene in stem cells of a patient with cystic fibrosis. In 2015, Chinese scientists led by Junjiu Huang have used CRISPR technology to modify human embryonic genes. The ability to edit the genome also causes various ethical issues that need to be carefully considered. 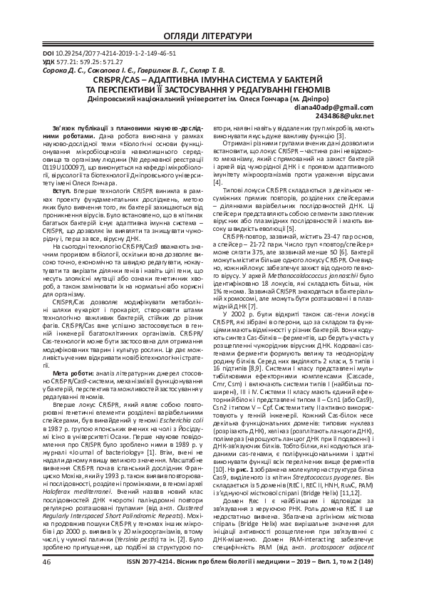