Bulletin of problems biology and medicine / Issue 1 Part 2 (149), 2019 / THE INFLUENCE OF VANADIUM CITRATE ON BODY MASS, BLOOD GLUCOSE LEVEL AND ANTIOXIDANT PROTECTION IN THE LIVER AND KIDNEYS OF RATS WITH ALLOXAN DIABETES MELLITUS
Sushko O. O., Iskra R. Ya.


THE INFLUENCE OF VANADIUM CITRATE ON BODY MASS, BLOOD GLUCOSE LEVEL AND ANTIOXIDANT PROTECTION IN THE LIVER AND KIDNEYS OF RATS WITH ALLOXAN DIABETES MELLITUS

Today, diabetes mellitus is one of the most common metabolic diseases. Therefore, there is growing interest in finding new pharmacological agents for the prevention and treatment of diabetes mellitus. The aim of our studies was to find the influence of vanadium citrate on the body mass, blood glucose level and on the state of the pro/antioxidant system in the liver and kidneys of rats with alloxan-induced diabetes mellitus. Object and methods. The research was conducted on 40 white laboratory rats kept in the vivarium of the Institute of Animals Biology. Rats with the weight in the range of 100-120 g were divided into four groups: I – the control group, II – the control group with diabetes, III, IV, V – experimental groups. Rats from groups I and II were given pure water without any additives; III, IV and V were given water with the solution of vanadium citrate in the amounts of 0.125, 0.5 and 2.0 μg/mL of water. Experimental diabetes mellitus (EDM) was induced in the animals from II, III, IV and V after a 24-h fasting period by intraperitoneal administration of 5% solution of alloxan monohydrate (“Synbios”) in the amount of 150 mg/kg of body weight. In order to detect hyperglycemia, we collected blood from the tail vein and measured glucose level in the collected blood using a portable glucose meter (Gamma-M). Dynamics of changes in glucose levels was carried out immediately before the start of the experiment and was continued after the injection of alloxan on the 32nd, 36th, and 40th days of studies. Glucose level in rats` blood more than 11.1 mmol/L was accepted as a successful induction of diabetes mellitus. Normal healthy rats were injected with physiological saline. On day 40 of the study, the animals were withdrawn from the experiment and decapitated under thiopental sodium. We determined the content of lipid hydroperoxides, TBA-active products, the content of reduced glutathione, catalase activity, superoxide dismutase activity, glutathione peroxidase and glutathione reductase activities in liver and kidneys tissue. Results. The weight of the body of animals with diabetes decreased, and the glucose concentration increased in the blood of these animals. Body mass increased, and the blood glucose concentration decreased due to the effects of vanadium citrate in different doses compared to the level of rats with EDM from group II. The activity of catalase (CAT), superoxide dismutase (SOD), and glutathione levels of antioxidant protection decreased, while the content of TBA-positive products and lipid hydroperoxides (LOOHs) increased in liver tissues of animals with EDM from group II. The activity of CAT, glutathione peroxidase (GPx), glutathione reductase (GR) and the content of LOOHs and TBApositive products increased in kidney tissue homogenates in rats from group II. The content of reduced glutathione (GSH) and the activity of SOD decreased in the kidneys of animals with EDM compared to control. Pro/antioxidant status of the liver and kidneys was stabilized for the introduction of animal vanadium citrate. Indicators approached the level of control animals. The activity of GPx and the content of LOOHs decreased, the content of GSH increased in liver and kidney tissues. The activity of CAT and GR increased in liver tissues, and the indices had the opposite character in the tissues of the kidneys. Conclusion. Obviously, vanadium, like insulin-mimetic and antioxidant, has the ability to accept free radicals and, accordingly, reduce oxidative stress in tissues of diabetic animals. 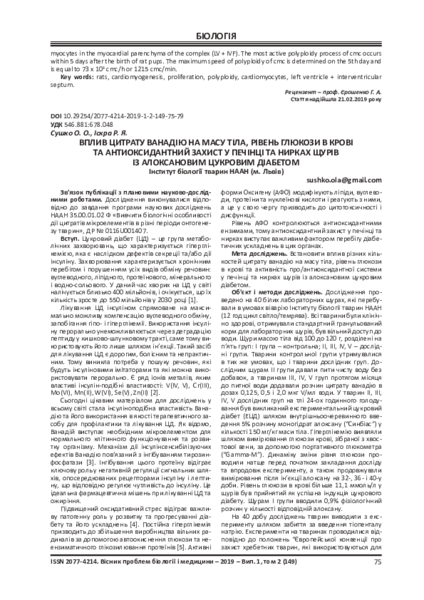