Bulletin of problems biology and medicine / Issue 1 Part 2 (149), 2019 / THE EFFECTIVENESS OF THE USE OF INCENTIVE SPIROMETRY IN THE PREOPERATIVE PERIOD
Kuzmenko T. S., Vorotyntsev S. I.

The aim of the study was to assess the effect of preoperative use of incentive spirometry (IS) on inspiratory lung capacity (ILC) and the development of postoperative pulmonary complications in patients with moderate and high risk of their development in abdominal surgery. Object and methods. The study consistently included 47 patients aged ≥18 years and with ARISCAT rating of more than 26 points, that underwent surgery on the upper floor of the abdominal cavity for more than two hours. Exclusion criteria: age <18 years, pregnancy, ASA V, hemodynamic instability (cardiac index <2.5 l/min/m2 , need for inotropic support), intracranial lesions or a brain tumor, history of mechanical ventilation for the last two weeks, history of pulmonary operations, lung disease of any etiology, patient’s refusal to participate in the study and discontinuation of spirometry training for any reason. The patients were divided into two groups, the first group (n=23) included patients who began training IS 2 days before surgery and continued them for 7 postoperative days. Group 2 (n=24) included patients who were engaged in IS in the first postoperative week. The training was conducted with a Coach 2 spirometer (Smiths Medical International, UK). The patient performed a deep breath through the mouthpiece of spirometer in a sitting or half-sitting position, the incentive spirometer was placed in front of the patient. At the height of inhalation, the breath is held for 3-6 seconds, then the usual exhalation into the atmosphere. IS sessions were performed for 10 minutes every 2:00, starting from 10:00 to 20:00. It was not recommended to perform the exercises for one hour after eating. To assess the state of the respiratory system and as a criterion of the effectiveness of the technique was used ILC. Before starting training, the initial ILC was determined with the help of an incentive spirometer. IS training was started in all patients, regardless of the initial inspiratory capacity of the lungs. The end points of the study were recorded pulmonary complications that developed within 7 postoperative days. These included: atelectasis, pneumonia, pneumothorax, pleural effusion and hypoxemia. Statistical processing of the data was performed using the software package Microsoft Excel 2013 and Statistica for Windows 6.0. Results. After the first day of training the ILC in the first group increased on average by 228±149 ml (p=0.000062). At the end of the second day of training, there was a significant increase in inspiratory lung capacity by 419±202 ml from the initial (p=0.000013), 43% (10/23) of patients reached the proper value of inspiratory lung capacity. It should be noted that in all patients with initially low inspiratory capacity of the lungs, the indicator increased during the sessions. In patients with initially the proper level of inspiratory capacity of the lungs, this indicator remained constant. Analysis of the comparison of clinical results showed that the number of pulmonary complications was less in the group engaged in stimulating spirometry in the perioperative period, but the differences between the groups were statistically insignificant (relative risk (RR) 0.78 [95% CI 0.19-3.12], odds ratio (OR) 0.75 [95% CI 0.15- 3.79] - for atelectasis; RR 0.35 [95% CI 0.039-3.10]; OR 0.32 [95% CI 0.031-3.31] - for pneumonia, RR 0.69 [95% CI 0.13-3.79], OR 0.66 [95% CI 0.10-4.40] for pleural effusion). Conclusions. The use of incentive spirometry in the preoperative period leads to an increase in inspiratory lung capacity in patients with initially reduced levels, but does not affect the development of pulmonary complications in the postoperative period. 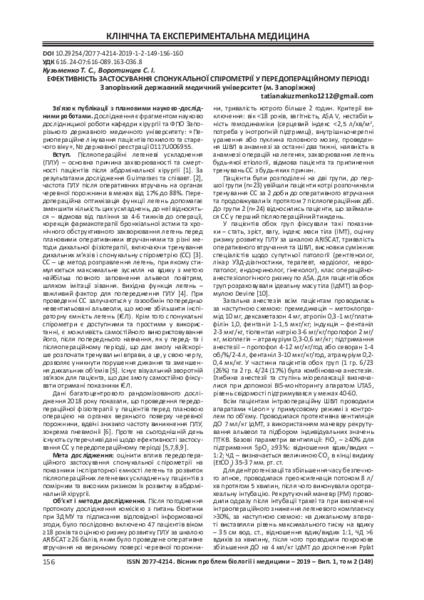