Bulletin of problems biology and medicine / Issue 1 Part 2 (149), 2019 / THE INVESTIGATION OF THE ENDOGENOUS INTOXICATION INDICES IN RATS IN THE DYNAMICS OF THE CRUSHSYNDROME DEVELOPMENT
Pylypchuk T. P., Krynytska I. Ya.

Long-term compression syndrome (crush-syndrome) occupies 15-24 % in the structure of traumatic lesions and is characterized by severe course, development of a syndrome of systemic inflammatory response and disseminated intravascular coagulation syndrome, leading to multiple organ failure and high mortality of the victims, even in specialized hospitals. The aim of our study was to investigate the dynamics of endogenous intoxication indices changes in rats’ blood and liver on the model of endotoxicosis, which is formed under conditions of crush-syndrome. Experiments were carried out on 40 inbred, sexually mature white male rats weighing 180-200 g, which were modeled with crush-syndrome of medium degree. The rats were divided into five groups: intact animals, experimental group 1 – 1 day of observation, experimental group 2 – 3rd day of observation, experimental group 3 – 7 days of observation, experimental group 4 – 14 days of observation. Blood serum and liver homogenate were used for the investigations. Determination of the content of middle-mass molecules was carried out in accordance with the Lifshits R.I. method. In the dynamics of the post-traumatic period of the crush-syndrome, an increase in the level of endogenous intoxication has been established, as indicated by an increase in the content of medium mass molecules, with a peak at the third day of observation. Thus, on the 3rd day of observation, the content of MSM1 in serum was significantly increased by 23.6 % compared with the 1st day and 2.1 times exceeded the control group data. Regarding the changes in the content of MSM2 in blood serum in the crush-syndrome dynamics, the 3rd day of observation revealed a probable prevalence of this index by 2.4 times vs intact rats, which was significantly higher by 38.1% vs the data for 1st day of observation. When comparing the dynamics of changes in endogenous intoxication indices, their synchronous development in blood and liver, with predominance in the liver has been established. It is associated with destructive changes, development of inflammation, hypoxia, decrease of the energy potential of the liver and activation of lipids peroxide oxidation. 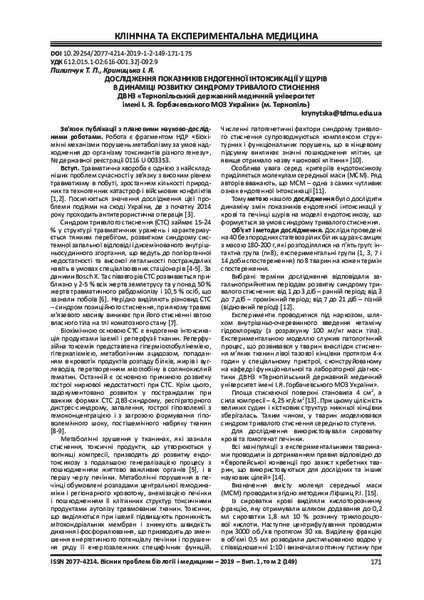