From 2 to 7% of the total population aged from 50 to 75 years old suffer from obliterating atherosclerosis of the aorta and lower extremities arteries. Atherosclerotic lesions of the arteries of the lower extremities are the most common disease, which leads to decreasing quality of life and death of patients, especially the old and the elderly. Almost 90% of all arterial operations are performed on atherosclerotic lesions of the abdominal aorta and the femoral-popliteal segment. For most patients surgical interventions are performed only at III-IV stages of obliterating atherosclerosis of the lower extremities. At the same time, the threat of ineffective results of reconstruction and restoration operations and the occurrence of complications increases. Unfortunately, the number of unsuccessful results in surgical treatment of critical ischemia of the lower extremities remains high. Thus, nowadays the issues of vascular surgery remain the improvement of the surgical technique of surgical interventions on atherosclerotic occlusive-stenotic lesions of the major arteries of the lower extremities. The purpose of the study was to conduct an analysis of scientific literature devoted to improving the restoration of the blood flow of the lower extremities when performing reconstructive operations on arteries in patients with obliterating atherosclerosis. In severe chronic ischemia of the lower extremities, reconstructive surgery on the vessels is the only way to save the limb, and often the patient’s life. They are performed, according to various authors, in 41,6-78,4% of cases. This kind of surgical intervention does not require deep anesthesia and runs without opening the cavities, which greatly reduces the intra- and postoperative risk. Recovery operations are performed in 90% of cases under epidural anesthesia. In 56,2% of cases, femoral-popliteal bypassing performed with distal vascular anastomosis formation above the articular joint of the knee, and in 43,8% – below the articular joint of the knee. The timeliness of the reconstructive operation is of great importance. This is due to the fact that the preservation of the distal bed, and hence the patency of the shunts, is better if the intervention is performed before the development of chronic critical ischemia of the lower extremities. In cases of critical ischemia, 76% of patients over the age of 60 without forced revascularization of the affected limb are forced to perform high amputations. However, despite the progress of angiology, the achievement of modern anesthesiology and intensive care, restoration operations on the femoral ankle-neck segment remain interventions with an increased risk for the patient’s life. The main cause of unsuccessful reconstructions is postoperative complications that occur in 40-60% of patients. They distinguish local (specific) and general (non-specific) complications both in the early (before year) and remote postoperative period. The number of nonspecific complications significantly exceeds the number of specific (64.8% and 35.2% respectively). The leading postoperative complication, especially in patients of the older age group, is acute myocardial infarction (9.2%). Specific complications of the early postoperative period in reconstructive angiosurgery include thrombosis, bleeding and suppuration in the areas of vessel reconstruction or prosthetic reconstruction. They occur in 8.9 – 44.2% of cases. Technical reasons for unsuccessful reconstructions are due to improper superimposition of vascular anastomoses, inadequate selection of prosthesis material, technical untraining of the surgeon. The passage of the femurpopliteal or femoral shunt depends on the type of operation, the material from which the prosthesis is made, its length, the state of the circulatory system of the patient’s blood. Therefore, the surgeon’s actions during reconstruction and restoration operations on the arteries of the lower extremities with their atherosclerotic lesions should be aimed at improving the diagnosis of the distal arterial bed, improving the outflow of blood and improving the technical methods of performing surgical interventions Thus, the main cause of the early thrombosis of alo-autoshunts is the violation of the technical requirements for the formation of vascular anastomosis. Improvement of the results of treatment of these patients will be facilitated, first of all, by the improvement of the surgical technique of conducting surgical interventions in atherosclerotic occlusive and stenotic lesions of the major arteries of the lower extremities. 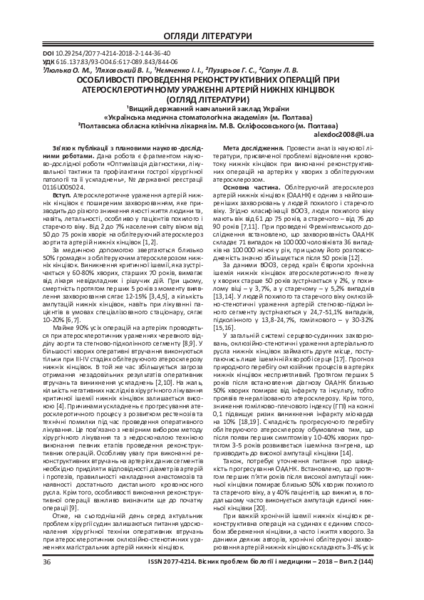