FEATURES OF THE ONTOGENESIS OF SERRATULA CORONATA L. AND SERRATULA TINCTORIA L. IN NATURAL HABITAS

Currently, much attention is paid to the searching for new sources of phytoecdysteroids – natural analogues of adaptogenic therapeutic and prophylactic agents, which are largely capable of restoring and enhancing performance in mental and physical overwork. Special attention should be paid to plants of the genus Serratula L., among which the S. coronata L. and S. tinctoria L. have a wide area on the territory of Ukraine. Due to the growing need for medicinal raw materials and the wide practical uses of these plants, the relevance of study the processes of their biological development in natural growth, underlying the stable existence of agrocenoses of species of the genus Serratula, has become important. S. coronata and S. tinctoria are racemo-rooting, short-rhizomous, perennial, monocarpic herbaceous plants. Both the sespecies begins the growth almost simultaneous lyandit depends on the sumoff avorable temperatures, usually it occursin the first decade of аpril, mass regeneration was observedin the third decade of April. The wintering buds forms hootsof the secondorder, the maximum in crease of which occurs during Мay – the first decade of June. Almost all shoots reach reproductive status, but some of them can continuer osette grow than development. Three age periods are character for ontogenesis of S. coronata and S. tinctoria. They are latent, pregenerative and generative. In the first year of the vegetation the individuals of S. coronata and S. tinctoria pass the phases of the pregenerative period, a wit: phases of seed lings, juvenile an dimaturous. The passage of the sestages of ontogenesis depends on the various vegetative conditions of the plants. At the second and subsequent years S. coronata and S. tinctoria form generative shoots, the above ground part of which dies after fruiting, and the bas alone becomes part of the hizome on which the buds restored. Middle-aged generatives tage of S. coronata plants reach at the third or fourth year of vegetation, and S. tinctoria at the third, fourth and sixth years of vegetation. The plants of S. coronata reach the old generative stage at five years of age and S. tinctoria at six years of age. The obtained results made it possible to identify the potential possibilities of plants for their introduction and to collect promising seed material for the continuation of research in the conditions of culture. As a result of the foregoing and previous studies of species of the genus Serratula in natural phytocenoses, the selected promising vegetative planting material and seeds with the potential creation highly productive introductory populations – valuable natural genetic material – will predict further extensive cultivation of useful plants to enrich the range of valuable industrially significant medicinal raw-material base, in particular Serratula L. 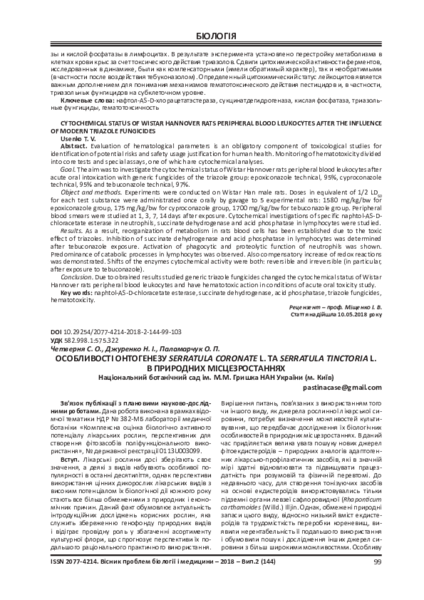