There are various factors associated with abnormalities of reproductive system, including nutrition, environment, socio-economic status, lifestyle and stress. There is every reason to suppose that pesticides also significantly contribute to reproductive disorders. Therefore, the purpose of this study was to identify the hazard and risk assessment gonado- and reproductive toxicity influenced by five generic pesticides cyproconazole of different manufacturers and in various technical grades on male and female Wistar Han rats and compare the results. Methods. The active substances of cyproconazole were administered daily by oral gavage for 5 days/week, in two groups of animals, 20 males and females in each, at doses of 0.2 and 2 mg/kg body weight for 10-11 weeks for males and 9-10 weeks for females. Control animals received equivalent amount of vehicle. Intact females, intended for mating, were kept at the same time with control and experimental animals. Functional indicators of gonad state and the animals ability to reproduction were examined after the end of exposure period. The duration and the frequency of each stage of the estrous cycle in female rats and the number of motile sperm, the total amount of sperm and the number of abnormal forms of germ cells of the male rats were studied. The reproductive function state in females was evaluated on day 20th of pregnancy. Thereby the number of corpora lutea in the ovaries, number of alive, dead and resorbed fetuses and embryos, the fetus weight, total weight of litters, the occurrence of malformations. The indices of pairing, conception, fertility, pregnancy, and the length of precoital interval were taken into account were registered. The studies were conducted in accordance with the recommendations of the Bioethics Commission and the standard operating procedures of the Center, within the Good Laboratory Practice (GLP) requirements. Results. All five test substances in high dose of 2 mg/kg body weight cause reproductive toxicity (antiandrogenic activity), which manifests in the changes of morpho-functional state of the gonads in experimental groups of males and reproductive parameters in females. In addition, there was adverse influence on males and females fertility, which was assessed by the indexes of conception and fertility. Conclusions. Comparing the obtained data, it may be concluded that all the test substances does not cause the general toxic effects and not induce any adverse effects on the reproductive function of male and female Wistar Han rats in the low dose 0.2 mg/kg/bw (NOEL). 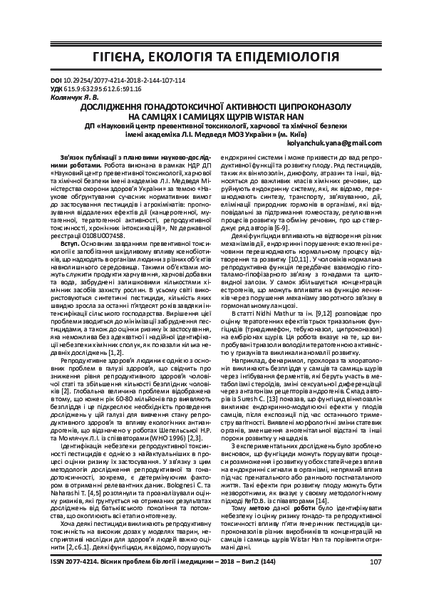