Disturbance of bone remodeling underlies osteoporosis, which can be caused by many factors, including complications of glucocorticoid therapy. Glucocorticoid-induced osteoporosis is characterized by increased apoptosis of osteoblasts and osteocytes, leading to a decrease in bone formation and alteration of bone tissue remodeling. Osteoclastogenic cytokines, including IL-1, contribute to the differentiation of osteoclasts, whereas anti-osteoclastogenic cytokines, such as INF-γ, inhibit the differentiation of osteoclasts. Aim. To study the role of intercellular mediators (on the example of interleukin-1β and γ-interferon) in the mechanisms of regulation of bone tissue remodeling processes under the influence of glucocorticoids. Object and methods. Two groups of white rats were studied. Disorders of bone remodeling were verified by measurement of bone density. Levels of IL-1β and INF-γ were determined by ELISA in the serum of animals. Results. The mineral density of the bone tissue of the animals of the group with a violation of bone tissue remodeling by glucocorticoids was significantly lower in comparison with the bone density of the animals in the control group. The level of IL-1β in the rats of the group with impaired bone remodeling of glucocorticoids was significantly higher in comparison with the control (5,227 ± 0,324 pg/ml and 1,846 ± 0,208 pg/ml, respectively, p<0,05). The level of the INF-γ group of animals with a violation of bone tissue remodeling by glucocorticoids was slightly increased in comparison with intact animals (29,59 ± 2,217 pg/ml and 28,569 ± 2,595 pg/ml, respectively, p>0,05). IL-1β is one of the most potent pro-inflammatory cytokines. It stimulates bone resorption by regulating the κB (RANKL) nuclear factor activator receptor ligand and inhibits osteoclasts apoptosis. In addition, IL-1β inhibits osteoblastogenesis, reducing the formation of a new bone. Glucocorticoids partially inhibit the production of IL-1, thereby inhibiting the resorption of bones. At the same time, glucocorticoids can activate inflammatory signaling pathways by increasing the expression of TNF receptor-associated factor 6 (TRAF6), which connects inflammatory signals from the membrane receptors of cytokines, including the IL-1 receptor, to the networks of transcription factors inducing an inflammatory response. The increase in the content of the pro-inflammatory cytokine IL-1β in our study can apparently be explained by the activation of inflammatory pathways by glucocorticoids, which contradict the anti-inflammatory role of glucocorticoids. INF-γ is an immunomodulating cytokine with a pleiotropic role in bone metabolism, and its effect on the formation of osteoclasts depends on the specific conditions in the microenvironment and the concentrations of other cytokines that regulate the differentiation of osteoclast precursors. In our study, the level of INF-γ did not generally change, but this indirectly led to a change in the balance of anti-inflammatory cytokines. Conclusions. In the group of animals with a model of disturbed bone tissue remodeling under the influence of glucocorticoids, an increase in the levels of interleukin-1β and γ-interferon is observed, which leads to an imbalance in the system of regulation of bone remodeling. The complex interaction between glucocorticoids and altered bone homeostasis is the subject of intense clinical interest and requires further research. 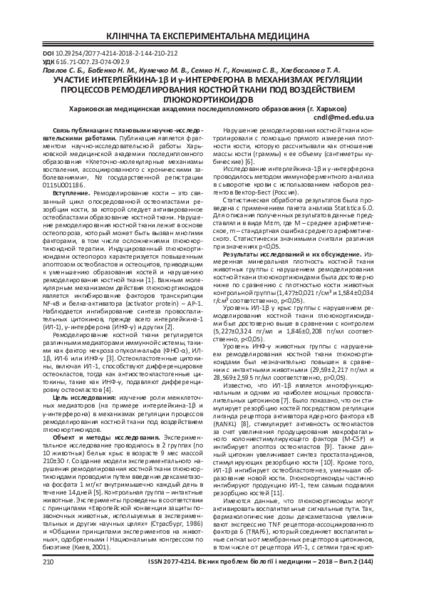