Bulletin of problems biology and medicine / Issue 2 (144), 2018 / THE DYNAMICS OF BLOOD MICROELEMENTS IN NEWBORN WITH PERINATAL ASPHYXIA
Sadygova Sh. A.


THE DYNAMICS OF BLOOD MICROELEMENTS IN NEWBORN WITH PERINATAL ASPHYXIA

Purpose. Study of the level of micro-and macroelements in dynamics in hypoxic-ischemic lesions of the Central nervous system in newborns of different gestational age. Methods. 68 newborns (the main group) with perinatal asphyxia (PA) were involved. All examined children were divided into 2 groups: the 1st group included 41 children born earlier (28-36 gestational weeks), the 2nd group-27 children born earlier (37-40 gestational weeks). The children of the 1st group, who were born early, were divided into 2 subgroups, depending on the gestational age: subgroup 1A included 19 children born at 28-31 gestational weeks, and subgroup 1B included 22 children born between 32 and 36 weeks. The control group consisted of 29 children with gestational age and body weight corresponding to the main group. All examined children had neurosonographic and biochemical examinations in the dynamics of the neonatal period (3-5-th and 21-28-th day). The body weight of children ranged between 930 and 3880 grams. When forming the main and control group, viral and bacterial infections, congenital malformations were excluded. The concentration of trace elements was determined by the method of emission spectral analysis. The following analytical lines were used: Ca-3258, 87A, Mg-2852, 13A, Fe-3020, 60 A, Zn – 3345 A, Cu-3233 A. Results. The decline in the statistical accuracy (p<0.05) and high accuracy in newborn 1-St and 2-nd group, it was noted in the concentration of Fe, Mg, Cu, and Zu. When comparing newborns from the main group, a clearer decrease was noted in children from the 1st group who were born earlier; unlike newborns from the 2nd group, they noted a decrease in the accuracy in the concentration of Mn, Ca, and P. A more obvious decrease in the concentration of metals in blood serum in newborns included in the 1st group was noted in children born deeply premature in subgroup A. Obviously, all this is due to insufficient provision of micronutrients to the mother during pregnancy, on the one hand, and the accumulation of most trace elements in the fetus and its tissues in the III trimester of pregnancy. At the end of the neonatal period, along with metals (Fe, Cu, Zn, Mg), studied at 21-28-day life of the child, had identified the exact positive correlation (r > 0.35;PL0.05) between the Ca and gestational age, between the results of the evaluation on Apgar was weight and height, as well as the exact negative relationship (r= -0.34;PL0.05) between the syndrome of apathy. It should be noted that the low concentration of trace elements (ТE) in serum in the early neonatal period is a serious factor that complicates the hypoxic-ischemic lesion of the Central nervous system in the neonatal period. The concentration of trace elements in blood serum varies depending on the gestational age of newborns. A very low level of trace elements in the early neonatal period was found in newborns born prematurely and after PA. At the end of the neonatal period, the concentration of all trace elements in newborns of this group remains low and does not reach the level of healthy children born in a timely manner. Conclusion. Deficiency of micro-and macronutrients in children born prematurely and suffered PA leads to metabolic disorders of cells and, subsequently, to a violation of the structural and functional integrity of cells. 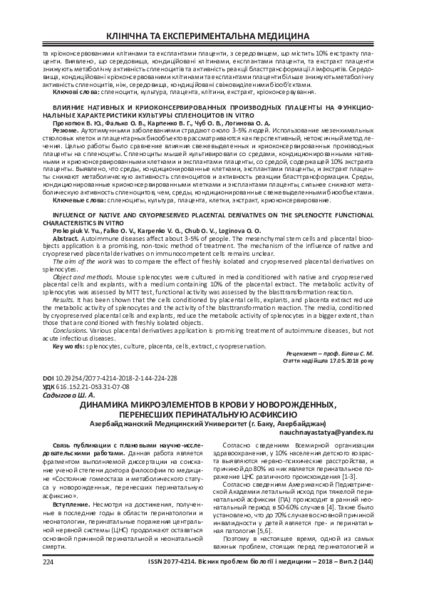