Morbidity on diabetes mellitus takes one of the dominant places in the economically-developed countries. Diabetes mellitus clinical peculiarity represents factor of increasing in heart-vascular pathologies, thrombophlebites, rheumatoid arthritis as well as atherosclerotic changings for the prevention of which salicylic acid derivatives are applied often. Health care Worldwide organization experts concluded that acetylsalicylic acid represented medicine with vegetative reaction multiple quantity. That is why there will appear the necessity of synthetic preparations replacement with nature salicylates, the active component of which is sodium salicylate. A given topic actuality is determined by salicylic acid derivatives usage possibility not only as anti-thrombotic preparations for treatment of the heartvascular system diseases accompanying diabetes mellitus but also as carbohydrate metabolism bioregulators possessing less side effects. The work aim was to establish salicylic acid derivatives usage possibility as carbohydrate metabolism bioregulators. 15 heads of 3-3,5 monthed rabbits were selected for the investigation. Three investigative groups were formed form them – 5 animals in every. The experiment comparative period lasted 28 days. The first group was a control one that is why it had a standard feeding ration estimated for autumn-winter period for animals 2 kilograms in weight. The second investigative group animals had a standard feeding ration to which one the investigators added sodium salicylate solution in a dosage 200 mg for 24 hours. The third investigative group received plant-origined salicylates namely Black Currants leaves (Ribesnigrum) watery extract. Sodium salicylate solution and Currant leaves watery extract were given to the animals twice a day in dosages 10 ml every. Glucose level measurements were performed in blood on an empty stomach as well as glucose-tolerant test was used. Carbohydrate loading was performed only when blood glucose level on an empty stomach was in the physiological norm ranges. Non-parametric statistic criterium of “Mann-Witney” was applied at the 1st and 5th experimental weeks for valuable assessing the difference between the 2nd investigative group indices. Thus, one can state that sodium salicylate as a chemical compound has a regulatory influence on carbohydrate metabolism while decreasing the glucose level till norm lower boarder probably by means of inhibiting the cyclooxygenase (COG) enzymatic activity as well as prostaglandins synthesis diminishing thus when catalyzed pancreas betacells insulin release. Plant extracts containing natural salicylates have no regular effect on carbohydrate metabolism that possibly to be linked with active substance low concentration in a watery extract as well as with other biologically-active substances presence which probably possess an opposite effect. It is possible to consider further study of salicylic acid derivatives namely sodium salicylate influence on carbohydrate metabolism as well as pancreatic hormones activity as a grounded coming out of the results received as well as other clinical investigations data. Although salicylic acid derivatives application for diabetes mellitus prevention and treatment is not substantiated. First, practical investigation was performed on the healthy animals and we can not state that sodium salicylate have the same effect on the patients. Second, it is necessary to take into account side effects row at salicylates usage because salicylates possess influence on carbohydrate metabolism only in big concentrations the permanent applying of which is not expedient. Possible allergy reactions and increased individual sensitivity to salicylates both of natural and chemical origin represent also important factor. Thus, sodium salicylate influences on carbohydrate metabolism processes because why glucose high level in blood stabilizes more rapidly after carbohydrate loading. Black Currant leaves extraction, of sodium salicylate natural source, has no influence on organism tolerance to glucose comparatively to the chemically-synthesized substance. 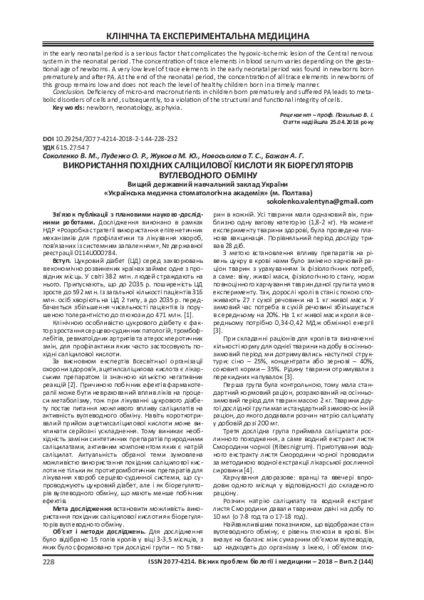