Bulletin of problems biology and medicine / Issue 2 (144), 2018 / THE IMPACT OF IMMUNOCORRECTING THERAPY ON PROTEIN METABOLISM DISTURBANCES IN PREGNANT WITH PERINATAL INFECTIONS
Shcherbina N. A., Vygivska L. A.

Protein metabolism during pregnancy is characterized by a significant activity. Its disturbances can be regarded as a signal for the development of complicated pregnancy, which requires timely diagnosis and administration of corrective therapy. The purpose of the study was to study the impact of immunocorrecting therapy on protein metabolism disturbances in pregnant with perinatal infections. The study involved examination of 180 pregnant women, who were included in the main group. Depending on the presence and nature of the diagnosed perinatal infection, the patients were divided into 3 groups: Group 1 – with viral (CMV, herpes simplex virus types 1, 2, 6), Group 2 – with bacterial (chlamydia, ureaplasma, mycoplasma) and Group 3 – with mixed (viral-bacterial) infections. Each of these groups was divided into 2 subgroups: with subsequent implementation of the infection in newborns (1) and without it (0). Control group comprised 50 patients with physiological pregnancy. Main group pregnant were administered immunocorrecting therapy: Group 1 – low molecular organic non-hormonal non-protein compounds derived from embryonic tissue of animals + flavonoids derived from wild cereals Calamagrostis epigeios L. and Deschampsia caespitosa L .; Group 2 – low-molecular organic non-hormonal non-protein compounds derived from embryonic tissue of animals + glucosaminylmuramylpentapeptide; Group 3 – low-molecular organic non-hormonal non-protein compounds derived from embryonic tissue of animals + ribonucleic acids. Serum of the pregnant was assessed for the content of total protein and protein fractions: albumin, total globulin fraction, alpha-1, alpha-2, beta and gamma globulin fractions. The content of total protein in serum of subgroup 11 patients was found to be increased by 11%, (Kruskal-Wallis test, p <0.05) after the treatment, and the level of gamma globulins decreased within the permissible limits. Total protein content of the globulin fraction maintained a tendency to increase; however, the ratio of globulin fractions was approaching the parameters of the control group. Comparison of the results achieved after the treatment with the control indices showed nearly complete normalization of protein composition of the blood after the treatment in subgroup 11. Total protein content in pregnant of subgroup I0 was found to exceed the initial by almost 12% (Kruskal-Wallis test, p <0.05). At the same time, the level of gamma globulins decreased significantly from the initial (by 15%, Kruskal-Wallis test, p <0.05), but still remained above normal. Quantitative composition of the remaining protein fractions (albumin and globulin) after the treatment was fully consistent with the norm. In subgroup 21, the treatment influenced nearly all the studied protein indices resulting in full normalization; consequently, they all corresponded to control values. In subgroup 20 patients the effect of treatment was manifested in an increase in basic parameters of proteinogram: total protein, albumin (Kruskal-Wallis test, p <0.05), gamma globulins (Kruskal-Wallis test, p <0.05). The level of beta globulins slightly decreased (Kruskal-Wallis test, p <0.05) and was within normal range. In subgroup 31, proteinogram obtained after the treatment demonstrated nearly complete normalization of protein formula of blood serum. As for deviations, patients were only found to have moderate hyperproteinemia – an increase in the average statistical control indicators by 12% (Kruskal-Wallis test, p <0.05). All other indicators were completely within the normal range. In subgroup 30, protein profile after the treatment was significantly different from the initial and did not have statistically significant differences with the control group. Only the level of beta globulins remained slightly elevated (about 13% above the norm, Kruskal-Wallis test, p <0.05). Conclusions: The conducted study showed that the developed immunocorrecting therapeutic complex in whole had a positive effect on protein metabolism, as evidenced by changes in the protein formula of blood serum in pregnant women with perinatal infections. 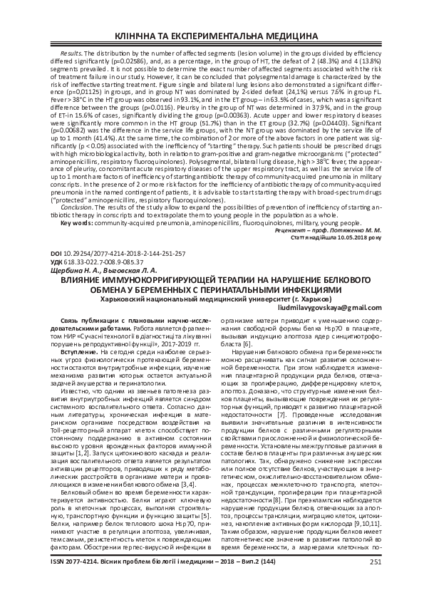