Authors had analyzed a large number of thematic literature and concluded that there was no single dogma regarding the determination of the sustained cyclicity of regenerative postoperative processes, which led to formation of normotrophic scar. The aim of the study. To investigate the basic regenerative processes in the skin of the neck of a person after planned surgical interventions in the chronological aspect. Object and methods of the study. The collective of the authors had operated and supervised by the process of postoperative scar formation in 58 patients with branchiogenic cysts of the neck after planned surgical interventions. The age range of the observation groups varied from 23 to 47 years. The difference in gender dispersion in this study was not conducted. The result of study. Microscopic examination of scar tissue in patients in the control group in the area of surgical intervention allowed to reveal the presence of epithelial cover over the entire surface of the connective tissue formatted scar, which indicated an almost complete epithelization process. The epithelial coating of scar in most observations was represented by a multi-layer keratinizated epithelium (32 ± 5 mcm), which is slightly less than the thickness of the intact epidermis. The stratification of the epithelial layer in general corresponded to the same unchanged epidermis. The basal layer was represented by cellular elements cubically arranged in one row, with oval kernels. Quite often, in the basal layer, mitotic figures were detected. That was indirectly indicated an activation of proliferative processes in the epithelial stratum. Also it was periodically noted intraepithelial lymphocytes that migrated to the epithelial layer of the dermis, overcoming the basal membrane.In the studded layer, in comparison with the intact epidermis of the corresponding region, in most cases there was a decrease in the number of cellular rows, which led to a decrease in the overall thickness of the epidermis. Above the studded layer in all observations, the stratum corneous scales, which form the most superficial stratum corneum, which correspond to practically complete maturation of the envelope epithelium at this stage of the reparative process, were determined. Like a studded, the horny layer often had a somewhat less thickness compared to a similar layer of an intact epidermis. Determination of the proliferative activity of cellular elements in the area of the formed scar by the universal marker of proliferative activity KI-67 did not allow to detect significant differences in the mitotic activity of cells of the basal layer of the envelope epithelium, and the intra nuclear expression of this marker was in approximately 30% of cells. At the same time, directly into the cellular elements of the formed scar – fibroblasts, positive expression of this marker was practically not detected, which indirectly may indicate a maturing of the latter in specialized fibroblasts, the main function of which is collagen synthesis. This way it was the increase of the amount of collagen fibers. The positive reaction to Ki-67 was not noted in cell of walls of blood microvessels. Conclusions. Thus, it was not noticeable changes in the intact derma surrounding forming scar. The most stereotypic changes were circulatory disorders in the form of hypertrophy of small venous vessels, small perivascular hemorrhages, and cellular reactions in the form small-lobe clumps of lymphocytes and plasma cells. 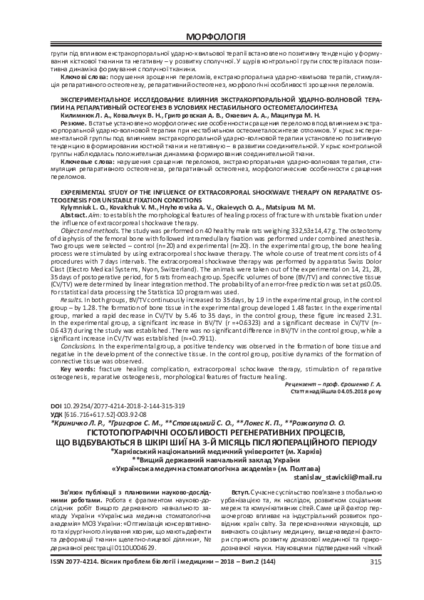