Postoperative delirium (POD) is a non-specific polyetiological syndrome that manifests itself with intermittent disorders of attention, consciousness, thinking and perception, as well as disorientation, impaired sleepwake cycle and altered psycho-motor activity. Depending on the psycho-motor disorder of POD is divided into three types: hypoactive, hyperactive and mixed. According to Marcantonio E.R. Delirium is one of the most common complications after surgery in elderly patients. In one third of patients over 70 years old, delirium occurs, in half of cases it is diagnosed even when entering the hospital, when the other half develops during inpatient treatment. Epidemiology. The incidence of POD is heterogeneous depending on the type of surgery and the risk of surgery and varies from 3% to 75%. According to Freddi Segal-Gidan, the very urgency of the intervention increases the incidence of POD compared to planned operations. POD occurs in 15-53% of elderly patients and in 70-87% of patients in intensive care units. There is no single pathogenetic theory for the development of POD. There are several hypotheses, one of which is related to impaired synthesis and inactivation of neurotransmitters, including an increase in dopamine levels and a decrease in acetylcholine, which increases neuronal excitability and ultimately leads to delirium. Risk factors. According to the European Society of Anesthesiologists, the occurrence of delirium depends on the favorable and provoking factors of the perioperative period. The favorable factors of the preoperative period include old age, male, hearing and visual impairment, dementia, reduced cognitive status, functional disorders or wear and tear of the organism, anemia and hypoalbuminemia, comorbidity, ASA≥III status, delirium in anamnesis alcohol abuse. Among the provocative factors of intraoperative periods, the following are important: pain, type of surgery (cardiovascular, orthopedic surgery and emergency surgery), type of anesthesia, anemia, hypoxia, polypragmasia, severity of inflammatory process, metabolic drugs. Prevention. Prevention is the most effective strategy to minimize the adverse effects of POD. And according to research results, in 30-40% of cases of POD can be avoided by correcting the triggering factors. J.S. Saczynski and co-authors say that the duration of POD correlates with the severity of cognitive impairment within a year after surgery. According to a number of studies, non-drug prevention, including the return of hearing aids and glasses to patients with impaired perception systems, pain control by non-opioid analgesics, early activation, optimization of daily biorhythms, reduces the incidence of POD by 30-40%. A number of studies suggest that non-opioid postoperative analgesia reduces the incidence of POD in comparison with narcotics. According to the authors the use of regional anesthesia techniques reduces the occurrence of postoperative delirium. Conclusion. Preoperative assessment and determination of risk of delirium development, implementation of strategies for prevention of delirium and application of standardized treatment protocols in its occurrence are the most important components of optimal perioperative care for the elderly. 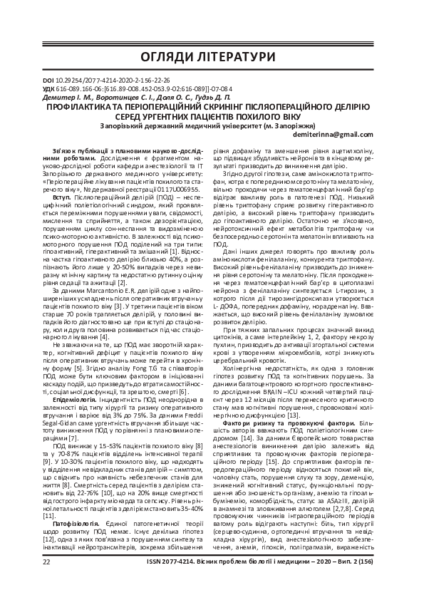