The article presents a brief history and current state of the study of the genetic mechanisms of susceptibility and resistance to human infectious diseases, which are the main cause of human death. For a long time, infectious diseases were considered pathologies in which the human genetic features play a minor role. Microbe virulence was considered to be a determining infectious factor. However, it has long been observed that mortality from infectious diseases is family, and simple twin studies have shown that the heritability of susceptibility to certain infectious diseases, such as otitis media, can reach almost 90%. But the most convincing evidence of the role of genetic factors in the susceptibility to infections has been obtained through gene research. These researches are conducted in several directions: monogenic susceptibility to multiple infections, monogenic susceptibility to single infections, monogenic resistance to single pathogenic agents, and polygenic susceptibility to single infectious diseases. Now over 200 primary immunodeficiency’s are known, which are characterized by the monogenic inheritance of susceptibility to numerous infections, the number and nature of which vary from case to case. The most wellknown among them is acute combined childhood immunodeficiency which is provoked by disorder of T lymphocyte development. The cause of the disease may be one of about 200 mutations of the IL2RG gene, which is localized in the X chromosome. Recently, primary immunodeficiency’s, which are characterized by a monogenic susceptibility to a single infectious agent, are increasingly being discovered. The wart-like epidermodysplasia, which is caused by various types of human papillomavirus, is rare but the most well known among them. It can be result of different mutations of one of two genes – EVER1 (TMC6) and EVER2 (TMC8), which are located on chromosome 17 (17q25.3). A gene, type of mutation and its localization are individual for each family where patients are. Typical examples of monogenic resistance to certain pathogenic agents are hereditary immunity against malaria and gastroenteritis. This immunity is provoked by loss of the receptors used by microbes for invasion owing to mutation of a single gene. Thus, a mutation of the DARC gene (ACKR1) localized in the chromosome 2 prevents the formation of a protein membrane on the erythrocyte surface, which is a receptor for malaria plasmodium, making the parasite unable to penetrate cells and cause malaria. Polygenic susceptibility to single infections is the result of the interaction of a large number of genes, each of which has a minor effect. The cumulative effect of polygenic inheritance depends on the characteristics of the individual genome and environmental factors. The susceptibility to polygenic disease is determined at a population level that does not reflect the picture at the personal level. In this case, the composition of major genes may vary depending on the individual. The classic examples of polygenic predisposition infectious diseases are tuberculosis and leprosy, which are quite common on our planet. Now over 100 candidate tuberculosis genes have been proposed, but only a small part of them have been studied. Over 20 candidate genes have been identified for leprosy, but only two have high statistical validity. The analysis of the available results of studying the human infectious diseases genetics indicates that further research is necessary. This is especially true for the study of the genetics of viral infections which are extremely dangerous to humans. 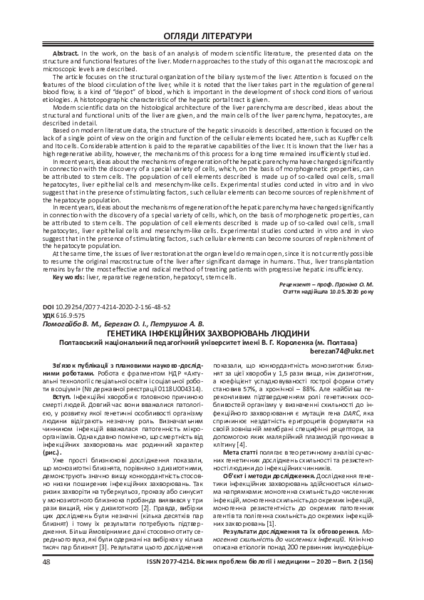