Bulletin of problems biology and medicine / Issue 2 (156), 2020 / ACUTE INTESTINAL INFECTIONS IN THE INFECTIOUS PATHOLOGY OF MAN AND THE PROBLEM OF «UNCULTIVATED» ORGANISMS
Dadashev E. A., Sadyhova F. E.

The goal is to identify the spectrum of bacterial microorganisms, including «uncultivated» from the fecal samples of sick children with OCI in the native material, as well as in the «secondary» culture, i.e. after exposure to bacteriophages, using the phenomenon of bacteriophage, 2 methods: classical culture methods and electron microscopy. Methods. When isolating and identifying pathogens from fecal suspension from patients with OCI, classical culture bacteriological methods were used using an expanded set of nutrient media. When studying the phenomenon of phagolizability, bacteriophages were used: staphylococcal liquid – Bacteriophagum staphylococcus fluidum, Intesti bacteriophagum combinireae ligvidum, Pyobacteriophagum combinireae liguidum. The study applied the method of paralisis. The method of electron microscopy using the latimet (Leitz) microscope was used to study the ultrastructure of microorganisms. Ultrathin sections were studied in a transmission electron microscope Hitachi 12 E and JEM-1400 at a voltage of 80-120 kV. Results. In the period 2010-2018, a bacteriological study of faecal samples from 2121 children with OCI aged 0 to 18 years was conducted. Of these, in 1093 cases (51.5%), the OKI was etiologically established, and in 1028 cases (48.4%), the etiology was not established. The revealed fact confirms the observations of modern researchers about the existence of «uncultivated» pathogens – possible real pathogens of the studied infectious process. Our research on the results of diagnostics of OKI diseases on the territory of Azerbaijan has revealed a certain percentage of etiologically established pathology. But, along with this, a significant percentage of cases of the disease with an unknown etiology was also found. This fact is interpreted as a phenomenon associated with the presence of «uncultivated», «resting» cells of microorganisms that are not detected by classical bacteriological methods. It seems necessary to expand and improve new diagnostic methods with the interpretation of the etiology of the infectious pathology under study, which is currently possible. Therefore, the purpose of our research was to determine the «uncultivated» pathogens when identifying inconsistencies with the OKI clinic of the isolated pathogen by the culture method. To this was applied the method of violetaviolenta with the use of electron microscopy. When comparing electron microscopy photos of the ultrastructure of bacteria detected by us from «secondary» cultures with photos from «Atlas» with the studied ultrastructures of microorganisms, it was found that the rodshaped forms we isolated coincide with photos of E. coli, Streptobacillus, in «resting» forms and Streptobacillus in modified forms. After exposure to bacteriophage, elements of microbial variability were detected: thickening of the capsule with uneven scalloped edges with erased pili, resembling the variability in the composition of biofilms. It should be noted that along with the detected pathogens in the form of «resting» rod-shaped cells, the presence of other unexplored (unknown) pathogens has been determined to date, which suggests the need to isolate as many pathogens as possible from the body of a patient with OCI in order to detect the true pathogen of infection. Conclusions. The established fact that there is a significant percentage of cases of OKI with unknown etiology suggests an expansion of the range of methods used to diagnose «uncultivated» pathogens that may be «true» pathogens of the infection under study 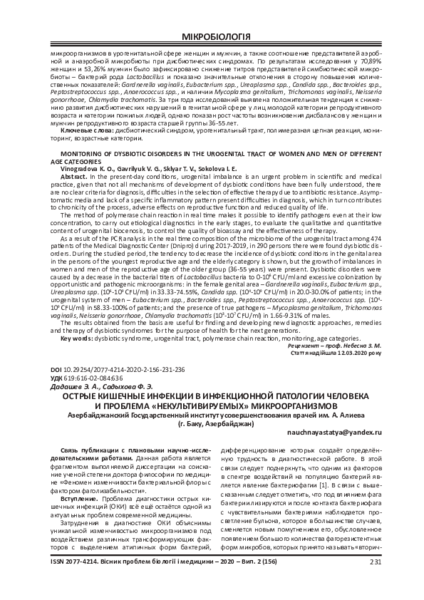