Bulletin of problems biology and medicine / Issue 2 (156), 2020 / THE EFFECT OF CADMIUM SALTS ON THE DEVELOPMENT OF VESSELS AND ATRIOVENTRICULAR VALVES OF RAT HEART UNDER THE CONDITIONS OF SELENIUM CITRATE CORRECTION
Nefodova O. O., Zadesenets I. P., Demidenko Y. V., Malchugin R. K

The increasing pollution of industrialized countries requires the study of the effects of environmental factors on human health. Heavy metals are one of the most common and dangerous environmental pollutants. The latter, when they enter the human body, lead to acute and delayed complications, change the balance of trace elements, the course of diseases, pregnancy, and cause different malformations. Cadmium is one of the few toxic metals that has no known physiological functions in the body. It is toxic at very low levels, has acute and chronic effects on human health. The search for antagonists that reduce the toxic effect of cadmium is a priority in scientific researches. The aim of the study was to investigate the effect of cadmium salts on the development of blood vessels and atrioventricular valves and the accumulation in the heart of rat embryos during isolated administration and in combination with selenium citrate. To simulate chronic toxicity during cadmium exposure throughout pregnancy, female Wistar rats were administered cadmium citrate or cadmium chloride on a daily basis per os via the probe in isolation (at a dose of 1.0 mg/kg) or in combination with selenium citrate (at a dose of 0.1 mg/kg). The animals were in a standard diet for pregnant female rats, and they received water ad libitum. All, mentioned above, solutions of compounds were administered to the female rats enterally through the probe once a day, at the same time from the 1st to the 19th day of pregnancy. On the 20th day of pregnancy an operative slaughter was performed. The embryos were removed from the uterus, tested for a “live-dead”, weighed, photographed and fixed in 10% formalin solution for further histological examination. After fixation of 20-day-old embryos, the hearts of embryo rats were separated from body. From isolated hearts, sections of 4-6 microns thick (hematoxylin-eosin staining) were made using standard histological methods for further morphometric studies. On histological sections of the heart of the rat embryos of the 20th day of development in all groups we measured: 1) average width of the atrioventricular valve (AVV) flaps in the middle third (μm), M ± m; 2) average internal diameters of subepicardial vessels and myocardial vessels of compact myocardium in the middle part of both ventricles on identical sections of embryonic heart; 3) average internal diameter of the coronary arteries in the proximal part (μm), M ± m. Excellent results were obtained between the groups of isolated administration of cadmium chloride and cadmium citrate, which indicates the difference in cardiotoxic effects of these cadmium salts. Selenium citrate under the conditions of our experiment had a weak modifying effect on the mentioned above morphometric parameters of the rat embryonic heart.A positive result was obtained in the group of combined administration of cadmium chloride and selenium citrate relative to the indicator of the thickness of the flaps of the atrioventricular valves. In contrast to the group of isolated administration of cadmium chloride, in the group of cadmium chloride and selenium citrate, we observed a significant increase in the thickness of the latter. In the group of combined administration of cadmium citrate and selenium citrates, the result was worse than in the group of isolated administration of cadmium citrate relatively to the thickness of the atrioventricular valves. This indicates an increase in the negative effect of cadmium citrate in combination with selenium citrate on the mentioned above morphometric parameter. The selenium citrate requires further research, given the controversial results of the exposure with respect to cadmium compounds. 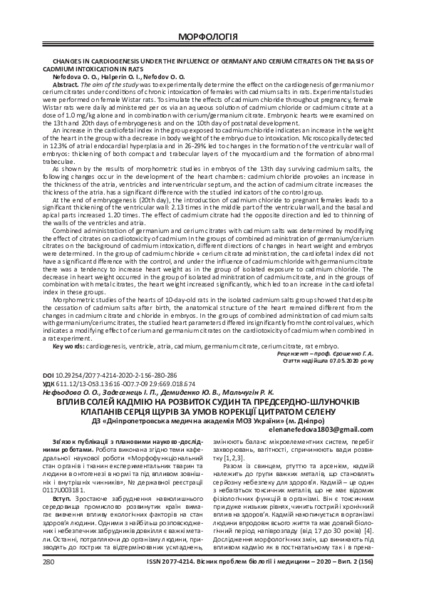