Bulletin of problems biology and medicine / Issue 2 (156), 2020 / AWARENESS OF THE «DNIPROSPETSSTAL» PLANT EMPLOYEES DUE TO THE RULES AND MEANS OF INDIVIDUAL ORAL HYGIENE IN THE PRESENCE OF ORTHOPEDIC STRUCTURES
Vozna I. V

The article is devoted to the analysis of the sociological survey’s results among the employees with harmful working conditions due to their attitude to the care of the dentures. We have carried out a study of the «Dniprospetsstal» plant employees opinion in Zaporizhzhya on the rules and means for the care of orthopedic structures. The surveys were conducted during the preventive examination. The questionnaire consisted of 14 questions, which can be divided into three functional blocks. The results of the survey were based on 250 people, including 113 (45.2%) men and 137 (54.8%) women. All the respondents were divided into the following age groups: from 18 to 25 years 17 (6.8%) respondents; from 26 to 35 years 22 (8.8%), from 36 to 45 years 86 (34.4%); from 46 to 55 years 88 (35.2%), 56 years and older 37 (14.8%) workers. The results of our study indicate, that the most respondents, unfortunately, visit the dentist when needed 182 (72.8%), once a year – 32 (12.8%), twice a year – 23 (9.2%) and only once in 3 months – 13 (5.2%) respondents. As the main reason for the refusal of dental care, the workers called the absence, in their opinion, the need for treatment and remoteness of the dental clinics. Unsurprisingly is the data, the dentist’s attendance largely depends on the patient’s age. Thus, young respondents between the ages of 18 and 45 visit the dentist only when needed (74.4%), while older people, aged 46 and over, usually for preventive purposes (87.2%). By the way, 131 (52.4%) of the interviewed are fully informed about the denture care rules, 86 (34.4%) are partially familiar with the denture care rules and 33 (13.2%) respondents are not familiar with the rules of the denture care. Different levels of awareness of the denture caregiving rules were observed among the men and the women. Thus, 42.5% of the men and 59.1% of the women are fully informed, 36.3% of the men and 21.8% of the women arenot fully aware of the dental care rules 21.2% of the men and 19, 1% of the women are not familiar with the rules of the denture care at all. When asked «From what sources did you find out about the denture care?», the most respondents (56.8%) said, they were informed by the dentist. There were 27.2% respondents of those, who were advised by their relatives, friends and colleagues. There were 12.8% of the respondents, who were informed by the media. There were only 3.2% of the respondents, who were interviewed in general medical institutions. According to 76.8% of the respondents, the information about the rules and means of orthopedic structures care in the media is absent, 23.2% of the respondents mentioned its presence as advertising. So, 16.4% of the respondents indicate, that this information is missed, 52.8% denote, that it is present as advertising, and 30.8% of the respondents – as science-based rules. According to 84.8% of the respondents, there is no such information in the general medical institutions. Only 8.4% of the respondents evaluate the quality of individual oral hygiene as «perfect», 44% of the respondents estimate as «good», 42.4% – as «satisfactory» and 5.2% – as «unsatisfactory». Half of the respondents regularly care for the dentures, 18.4% – irregularly, 24% – when needed and 7.6% do not follow to the rules of care at all. It is found, that 53.6% of the respondents do not have special care products for the dentures. However, 29.6% of the respondents had special-purpose toothbrushes and flosses, 15.6% had therapeutic and preventive mouthwashes and only 1.2% of the workers had irrigators. The majority of the men (56.7%) believe, that this information should be presented in the dental clinics and surgeries, 39.8% of the men – in the mass media and 3.5% of the men wanted to see it in the general medical institutions. The majority of the women – 58.4% wanted to see this information in the dental clinics; in addition, 16.1% of the women wanted to get this data in the general medical institutions, 7.3% – in the media and 18.2% of the women – in the pharmacies. Conclusions. Thus, only the half of the surveyed plant workers took care of the oral cavity and orthopedic structures regularly, but did not have the proper knowledge and skills in this field. Dentists should be more responsible both for informing and educating the employees about the orthopedic structures’ caregiving rules, and the monitoring of the oral hygiene care’s quality 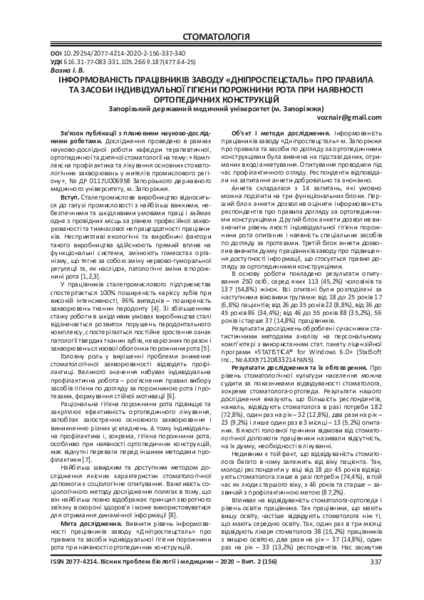