TORSION OF THE GREATER OMENTUM IN A CHILD

The greateromentum (omentum majus) is a derivative of the primary dorsal ripple of the stomach, namely, the dorsal mesogastry, and its development is connected with the formation of a bursa omentalis. The greateromentum appears at the embryo on the 5th week of intrauterine development, and the final formation ends up until the 20th week. The fixed part of the greateromentum, which is located above the transverse colon, is a gastro-dorsal ligament (lig. Gastrocolicum), and its free part, which covers the loops of the small intestine, has acquired the name “apron”. The average surface area of the greateromentum at children is 0.2-0.6 m2 , and at adults 0.4-0.8 m2 , which is equal to almost 1/2 of the entire surface of the peritoneum. The size and location of the greateromentum are directly dependent on the age of the child: at the carried full time newborn greateromentum covers 1/4 of the area of the small intestine, at 3-4 months – 2/3, to 5 years it reaches the flexor of the transverse colon. Conducted research has shown that under certain conditions the greateromentum acquires the relevant properties: plasticity, adhesion properties with traumatic or inflammatory surfaces, hemostasis, revascularization, absorption of fluid from the abdominal cavity, immunological response. The torsion of the large omentalis is a rare cause of abdominal pain at children. In the most of cases, patients suffer from acute pains in the right lower quadrant of the abdomen, which usually simulate acute appendicitis. The torsion of the large omentalis is rarely diagnosed before the operation, usually the diagnosis is made only during an surgery that is performed on suspicion of acute appendicitis or other urgent pathology of the abdominal cavity. Causes of the large omentalis are not established, but it is possible to differentiate the secondary torsion, which occurs in the presence of an organic cause of the involution and the primary, when such a cause is not detected. There are primary and secondary torsions. Primary occurs more often. Primary omentalis torsion, in which pathological changes occurs due to distortion and compression of vessels, occurs more often at boys, occurring without any apparent signs, that is, clinical data that exclude primary pathological changes in omentalis and in the surrounding organs. Secondary torsion occurs with the presence of tumor, cysts, hematoma, involvement of its ridge in infiltrates with appendicitis, cholecystitis, inflammatory processes of the pelvic organs, fixation to the postoperative scar, resulting in the formation of an axis around which the so-called “bipolar” torsion occurs. There are also partial (partial, in the area of free ridge), which occurs more often, and the total torsion of the omentalis. The factors that are conductive to the occurrence of the torsion of the omentalis include increased peristalsis, disturbance of blood circulation stagnant nature, abrupt movement of the body, rapid tension of the muscles during lifting heavy objects, sudden increase in intraabdominal pressure (often after abundant food intake), excessive body weight, united process in abdominal cavity, hernia of the anterior abdominal wall, chronic and acute processes of the organs of the abdominal cavity. Specific clinical picture during the omentalis torsion is absent. However, during the analysis of literary material it is possible to mark conditionally three main clinical variants of development and course of disease: the first is an acute onset with a marked pain abdominal syndrome, initially without a clear localization, which subsequently becomes more distinct in the right abdomen, which diminishes in a few hours, which may explain the late help seek of patients; the second is the gradual development of the disease with the remitting nature of the pain syndrome of insignificant intensity, with distinct localization in the right half of the abdomen; the third is the definition of palpation of the abdominal cavity of painful moving formation more often on the right lateral flank of the abdomen. Surgical treatment only 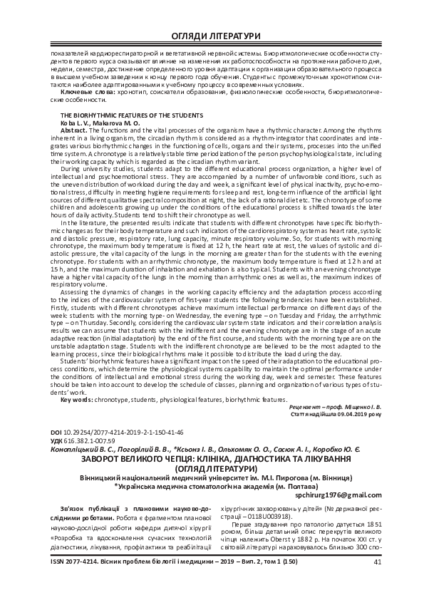