Infant and neonatal mortality are the main monitoring indicators that characterize the progress in achieving the goals of the Global Strategy for the Protection of Mothers, Children and Adolescents. Global documents evidence that, through concerted efforts, it is possible to reduce the world’s highest mortality rate to the indicators that are currently being observed in the countries with the highest average income. At the same time, scientists pay attention to the importance of understanding the immediate and major causes of child mortality, as well as the need to develop feasible programs aimed at preventing death of newborns in the future.The aim of the research is to examine the dynamics of indicators characterizing fetal and infant losses in Ukraine during 2014-2018, and their differences from the European countries. Object and methods. We estimated proportional (per 1000 live and dead births) and specific (per 1000 live births) indicators. Databases of the study were «MATRIX-BABIES» guides for 2014-2018, and its methods – the systematic approach and medical-statistical. Research results. Over the period of 2014-2018, the proportional indicators of ante- and intranatal mortality in Ukraine in the weight category of ≥ 2500 g remained almost at the same level and amounted to 1.84 and 1.89 (p = 0.586) and 0.32 and 0.29 (p = 0.230), respectively; whereas the proportional perinatal mortality rate decreased significantly from 3.21 to 3.14 (p = 0.053). The establishment of a network of perinatal centers in Ukraine, as well as training and internship of domestic neonatologists abroad has led to a significant decrease in specific indicators of early neonatal (0.96 vs. 1.1; p = 0.046), late neonatal (0.48 vs. 0.63, p = 0.01), postnatal (1.76 vs. 1.97; p = 0.041) and infant mortality (3.2 vs. 3.71; p = 0.0003) in the weight category of infants of ≥ 2500 g. However, these indicators in Ukraine remain much higher than those of the European countries. Infants with birth weight of ≥2500 g in 2018 had the most significant (42.0%) share in the structural distribution of children who died at the age of 1 year. At the same time, the proportion of children in the weight category less than 1500 g was 36.98%, and the weight category of 1500-2499 g – 21.02%. With regard to the structure of fetal and infant losses in the weight cohort of ≥ 2500 g in the time of their onset, 58.4% of losses occur during the perinatal period, with 17.8% – during the early neonatal period. Among the survived infants weighing ≥ 2500 g, 29.9% of losses are also observed in the early neonatal period, and more than a half (55.05%) occur in the postnatal one. Conclusions. In Ukraine, during 2014-2018, the proportional percentage of perinatal mortality, the specific indicator of infant mortality and its components, has reliably decreased against the background of constant proportional indices of ante- and intranatal mortality in the weight category of ≥ 2500. More than a half of all fetal and infant losses of this weight category in Ukraine occurs in the perinatal period, and among the survived infants – in the postnatal period 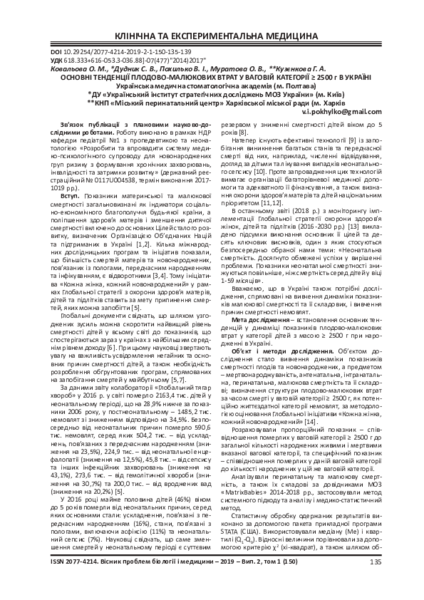