Since blood is an integral part of the organism regulatory systems playing an important role at maintaining homeostasis, the long-term administration of chemical substances may interfere the functioning of organism self-regulation. As the consequence of this process a number of pathologies of different organs and organ systems can develop, causing significant damage to human health. During in vivo experimental studies there was shown that carbendazim induces changes in quantitative composition of blood and violates the functional activity of peripheral blood cells in tested animals. However, the effect of carbendazim on the blood system during long-term administration is not sufficiently studied. Regarding these important problems, now the actual question of preventive toxicology is the clarification of nature of the toxic effects of carbendazim on the blood system during chronic intoxication. Obtained data would serve as a basis for assessing potential danger of this pesticide for humans and developing measures to prevent its negative toxic effects. Aim of study was to determine the nature of the toxic effect of carbendazim on the rat blood system during chronic intoxication. Object and methods. Carbendazim (generic product; level of purity – 98 %) was administered 5 times a week by intragastric route at doses of 5, 25, 75 mg/kg body weight in three groups of animals (5 male, 5 female animals per each group) during 104 weeks. Animals from the negative control group (5 male and 5 female animals) received an equivalent amount of solvent. Blood for haematological studies was taken from the tail vein. The study of hema-tological parameters was carried out in dynamics after 4, 13, 26, 39, 52, 78 and 104 weeks. In the peripheral blood of animals we have determined the following parameters: the concentration of the total hemoglobin level (by the cyanomethemoglobin method); the mean corpuscular hemoglobin concentration (MCHC); the number of red blood cells and leukocytes (count in the Goryaev chamber). In blood smears the number of reticulocytes was determined with use of the supravital stain with brilliant cresyl blue. The number of platelets was counted by Fonio method. Differentiated counting of leukocytes and cytomorphological analysis of cells to reveal the possible presence of atypical forms were performed on in blood smears painted by Pappenheim-Kryukov. Results and discussion. It has been established that during chronic intoxication with carbendazim in rats there is no clear dependence of “dose-time-effect” on both the cells of red and white blood. In separate study periods at doses of 5, 25, 75 mg/kg there was an increase in MCHC, and at doses of 25 and 75 mg/kg, we observed anisocytosis, acanthocytosis and polychromania of red blood cells, indicating an anaemizing effect. There were no significant changes in the number of leukocytes, lymphocytes, monocytes, however, in individual periods of study we observed a decrease in the number of basophils, eosinophils, and rod shaped neutrophils and a tendency to monocytosis. There were revealed also circulation of isolated macrophages and morphologically altered white blood cells (lymphocytes, neutrophils, monocytes), which may indicate a violation of the immunological status of the organism. In addition, increased levels of monocytes and the appearance of macrophages in blood in individual male rats may be caused with the presence of tumors in these animals. Conclusions. The main effect of carbendazim during long-term administration to the body of rats is the morphological changes in red blood cells, which could indicate the concealed anemia. The revealed quantitative and cytomorphological changes of white blood cells may be associated with a violation of the immunological status of the organism 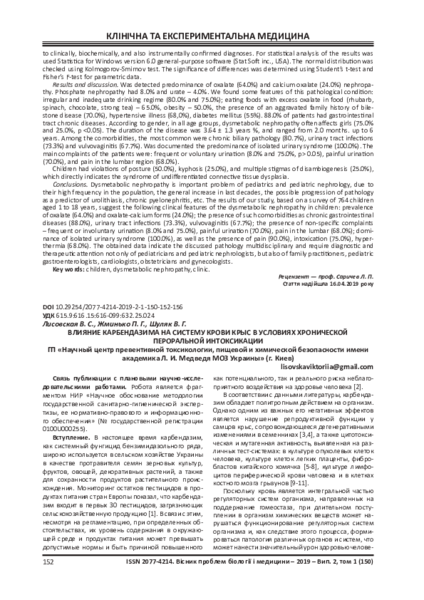