Bulletin of problems biology and medicine / Issue 2 Part 1 (150), 2019 / STUDY OF THE OPINION OF THE UKRAINE CENTRAL WEST REGION POPULATION ON THE SIGNING OF DECLARATIONS WITH THE FAMILY PHYSICIAN
Gerasimovich I. M., Tikhomirov V. A., Sheremeta N. V

One of the key stages of the primary health care reforming was the introduction of the innovation in 2017 – the signing of declarations with family physicians. It determines the unconditional relevance of studying the peculiarities of this process in the context of qualitative health care reform. The article is devoted to the new rules of the primary health care provision. It is shown how the quality of medical services changes after the introduction of the medical reform. The reason for the greatest concern of the Ukrainian population regarding the large number of patients the family doctor has to take care of is that there have been cases when the family doctor spends, according to the opinion of respondents, not enough time with every single patient due to the work overload. An in-depth study of this issue has shown that these fears are biased. Thus, less than 1500 people per one family doctor will not be able to provide an economical profitability of a medical institution, and the number of patients who will be difficult to cope with by their family doctor is more than 2500. For comparison, in Sweden, the «patients load» for a one family doctor is 2,430 people, in the Netherlands – 2300, at the same time, when in Ukraine, according to the law, only 2000 patients per one doctor are maximal. Assessing the competence and tolerance of a physician regarding the level of knowledge and attitude of the family doctor towards the patients who signed the declaration showed that 67.1 ± 5.3% of respondents consider their family doctor to be attentive, interested in all aspects of the disease, 24.0 ± 4.8% – family doctor restrained, raised only specific questions, and 8.9 ± 3.2% – the family doctor was indifferent, the details of the disease did not interest him. Regarding the attention paid during the admission, the majority (63,0 ± 4,8%) of respondents believed that the doctor limited his attention, 30,0 ± 4,6% considered that the doctor devoted little time and 7,0 ± 2,6 % answered that the doctor did not respond or responded too late. Therefore, the role of declarations signing with a family physician is economically justified. Implementation of medical reform in Ukraine is promising for both patients and family physicians. 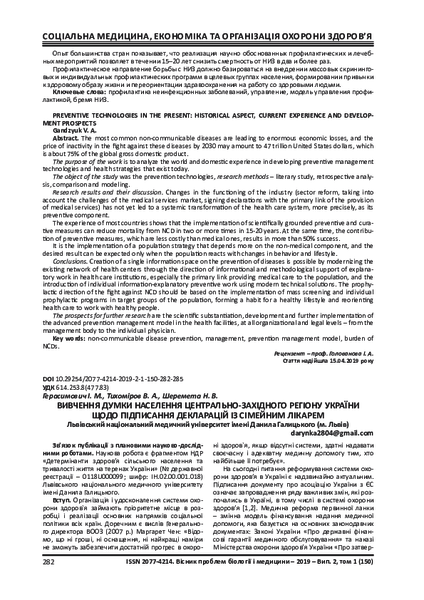