Bulletin of problems biology and medicine / Issue 2 Part 1 (150), 2019 / THE INFLUENCE OF PSYCHOLOGICAL TRAINING OF «DNIPROSPETSSTAL» PLANT EMPLOYEES ON THE MOTIVATION LEVEL TO DENTAL TREATMENT
Vozna I. V., Brigadir O. S., Kalyanova V. A.

The article deals with the analysis of the sociological study data conducted among the plant “Dniprospetsstal” workers as to their relation to the dental treatment. The purpose of the study was to analyze the influence of the certain work on the implementation of psychological patients’ training methods in the dental practice. The study of 350 “Dniprospetsstal” employees’ opinion was carried out: 192 (54.9%) women and 158 (45.1%) men who had asked for dental care to the MI “City Dental Clinic № 2” in Zaporizhzhya. We have divided all respondents into four age groups, for a more qualitative analysis of the psychological training effectiveness, depending on age. The first group consisted of 45 patients 18-25 years of age (12.8%), the second one had 63 patients 26-33 years of age (18.0%), the third group – 93 patients 34-45 years of age (26.6%), the fourth one – 149 respondents 46-60 years of age (42.6%). The closed profile questionnaire had 15 questions, which were grouped into two functional blocks. The first block of the questionnaire contained questions, which promoted characterizing the respondents’ attitude to dental care and revealed the main problems of interaction between the physician and the patient. The second block of the questions provided the information about the psychological training effectiveness. The questionnaires were filled in after the second or the third visits, namely, after a specially presented method of psychological training had been carried out by the doctors-dentists. The respondents answered the questionnaire’s questions voluntarily and anonymously. Notwithstanding of the modern dentistry, almost 42.0% of the respondents feel fear when they applied to the dentist. The respondents (47,1%) wish to communicate with a doctor in a friendly chat mode, 32,9% of the respondents have a wish to communicate in a business-like conversation (consultation) style. Our questionnaire had the question «How comfortable were you to communicate with a doctor?», which the respondent answered twice: before the conversation with the doctor and after it. The respondents’ answers «I discussed my problem freely» were only 57.1%, and after the conversation having been held such responses became 75.7%. Only a small percentage of the respondents 16.3% before the conversation and 7.7% after the conversation had the point of view «it’s awkward to talk». We were impressed by the fact, that 68.3% of the respondents to the question «How much has the doctor managed to prevent anxiety?» they responded «The doctor helped me to feel safer». These were elderly patients, who were constantly attending a doctor and were looking for a comprehensive treatment. Unfortunately, there were the answers – «The doctor did not pay enough attention to the state of my health» – 3.7% of the patients. 28.0% of the respondents answered, «The doctor tried to calm me down, but he failed». The use of psychological patients’ training in the dental treatment increases the confidence to the dentist and 87.7% of the employees plan to «get» to a such doctor. There are all the women and the older age groups’ representatives among them. «The doctor has helped me to understand the need of prevention», 91.7% of the respondents have such a point of view as «The doctor has convinced me in the need of prevention». Thus, the proceedings of different profiles of psychological patients’ training to the dentists’ practice provide to reduce the psychological discomfort before the treatment, to motivate the patients to carry out prevention in the workplace and at home, and to raise the trust to the doctor 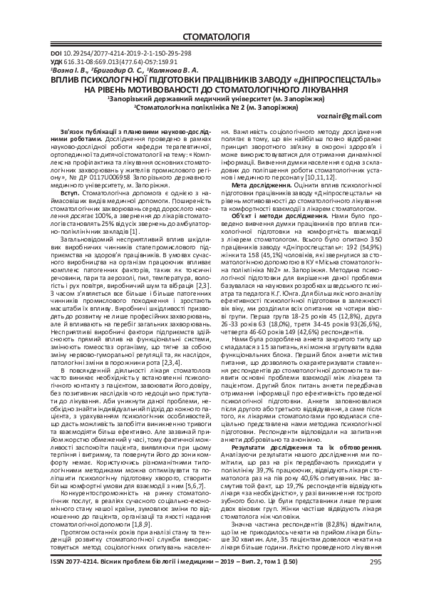