Bulletin of problems biology and medicine / Issue 2 Part 1 (150), 2019 / MICROBIOCENOSIS OF THE ORAL CAVITY OF EDENTULOUS PATIENTS BEFORE AND AFTER REMOVABLE PROSTHETICS
Fastovets O. O., Kryvchuk О. A.

Despite the rapid development of dental implantation, the requirement of the adult population of Ukraine in the traditional complete prosthesis remains rather high. Determination of the features of the microflora of the oral cavity before and after the prosthesis may explain the mechanisms of development of inflammation of the mucous membrane of prosthetic bed for the prevention of negative results of orthopedic treatment of complete adentia. So the aim of this study was to study differences of microbiocenosis of the oral cavity in edentulous patients before and in the short term after complete denture prosthesis. The object and methods of research. It was studied 100 edentulous patients before and after prosthetics. Besides clinical examination, the condition of the mucous membrane of the prosthetic bed was studied using the technique of macrohistochemical staining. Microbiological studies of oral fluid samples and scraps from the areas of the mucous membrane of the palate and the alveolar processes of the maxilla and mandible before and in 1 month after complete denture prosthesis were performed. For the identification of parodontopathogenic microorganisms in the oral cavity, a method of polymerase chain reaction (PCR) was used. Results and their discussion. Inflammation of the mucous membrane of the prosthetic bed in edentulous patients in the short term after the delivery of removable dentures according visual manifestations was diagnosed in 28.0 %, according to macrohistochemical staining – in 82.0 %. According to the results of microbiological research, significant differences in the microbiocenosis of the oral cavity before and after the prosthesis were established. They were described by the changes in the total microbial number (0.82 ± 0.12 • 108 CFU / ml versus 1.74 ± 0.23 • 108 CFU / ml, р ˂ 0.001). After prosthesis, it was found a large proportion of microbiocenosis on gram-positive and gram-negative optional and obligatory anaerobic coccal flora. The use of complete removable dentures contributed to an increase in the colonization of Streptococcus spp., Staphylococcus aureus and Staphylococcus epidermidis, Candida spp. and a decrease in Lactobacillus spp. and Bifidobacterium spp. (р ˂ 0.001). The use of removable dentures leads to a significant increase in the frequency of such periodontal pathogens as P. intermedia, A. actinomycetemcomitans, T. forsythia (p ˂ 0.001). The dysbiotic changes after prosthetics was registered in 27.0% of the examined patients, the dysbiosis of the I-II degree – in 64.0 %, the III degree – in 4.0%, the IV degree – in 5.0%. Conclusions. It has been established that the use of removable designs with plastic bases is accompanied by the development of oral cavity dysbiosis with predominance of coccus forms and the growth of candidal insemination, which together suppress the representatives of normal microflora, such as lactobacilli and bifidobacteria. There is a strong correlation between the degree of dysbiosis and the area of inflamed mucous membrane of the prosthetic bed (r = 0.82, p ˂ 0.05). In the oral cavity of edentulous patients, it was also diagnosed the presence of parodontopathogenic microflora, the number of which increased as a result of prosthetics. Prospects for further research. According to the data obtained from the study, taking into account the importance of exogenous and endogenous (general status of the patient) factors in the occurrence of oral dysbiosis, in order to find out the mechanisms of their development, it would be promising to study immune metabolic parameters, which would determine the directions of increasing the effectiveness of complete removable denture prosthesis. 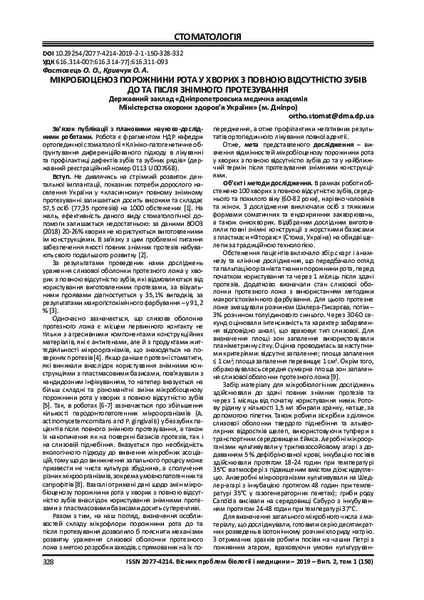