Bulletin of problems biology and medicine / Issue 3 (157), 2020 / CORRELATION BETWEEN THE ANATOMICAL STRUCTURE OF THE GENUS BEGONIA L. SPECIES’ LEAF BLATE OF AND CLIMATE FEATURES OF NATURAL HABITATS IN THE N.N. GRISHKO NATIONAL BOTANICAL GARDEN
Bielaieva Ya. V.


CORRELATION BETWEEN THE ANATOMICAL STRUCTURE OF THE GENUS BEGONIA L. SPECIES’ LEAF BLATE OF AND CLIMATE FEATURES OF NATURAL HABITATS IN THE N.N. GRISHKO NATIONAL BOTANICAL GARDEN

In current article climatic conditions of natural Begonia’s habitats and anatomical leaf blades’ features were analyzed. On the basis of anatomical study and ecological analysis of climatic conditions at the natural habitat the adaptation mechanisms of eight begonia species were established. The range of seven species’ distribution is limited to South America, B. dregeі is distributed in tropical Africa. Mesophytes is predominate group among begonias in relation to the water regime. However, some species belong to hygrophytes or hygromesophytes and tend to places with highly moistened soils, among begonias there is also a group of xerophilous (succulents) species that store moisture in leaves and stems. Nevertheless it was distinguished that a large number of begonias that have stomata collected in groups (stomata clusters), which is considered as an adaptive xeromorphic feature to growth in insufficient moisture conditions, do not have specialized organs of moisture storage. The purpose of the article is to compile ecological climatic characteristics of Begonia species at the natural habitats using comparative anatomical analysis of the leaf blade surface to establish adaptive mechanisms of begonias to the influence of various environmental factors. In the study of begonia’s climatic conditions of natural habitats, data on average monthly effective precipitation were analyzed. The index of total transpiration was determined using the program CLIM WAT 2.0, Italy. In current article the climatic conditions of the natural habitat were analyzed. After analyzing the numerical indicators of the moisture balance and moisture coefficients, it was found that the model species are characterized by periods of lack and accumulation of moisture. We discovered one continuous water deficient period from three to eleven months and short periods of water storage. Xeromorphic adaptations of Begonia species include the presence of specialized water storage organs and large epidermal cells. Beside that cuticle and trichomes play an important role in reducing the evaporation intensity from the leaf surface. The study of ecological and climatic conditions of natural places of growth and anatomical structure of the leaf blade allows to deepen the ecological characteristics of the plant organisms and to reveal the degree of adaptation to artificially created conditions of the green house soils. The study of climatic conditions of Begonia natural habitats allows to analyze their origin, get an idea of the specialization range to different ecological conditions. 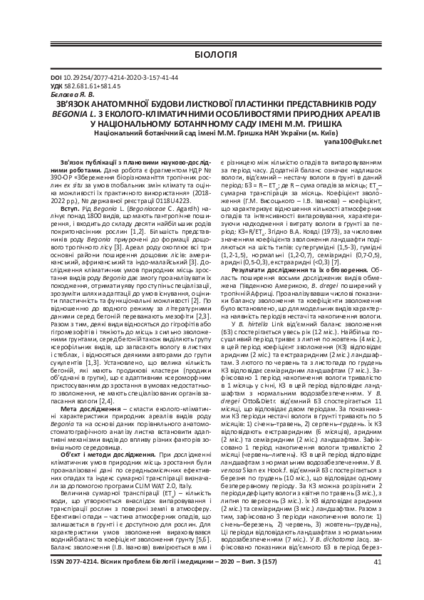