Bulletin of problems biology and medicine / Issue 3 (157), 2020 / DETERMINATION OF THE DEGREE OF EMBRYOTOXICITY OF CADMIUM CHLORIDE BY ENTERAL ADMINISTRATION THROUGHOUT PREGNANCY IN RATS
Shatorna V. F., Rudenko K. M.

With the growth of urbanization there is a complication of the ecological situation on high ways, area soccupied by industrial enterprises, as well as in adjacent areas. Heavy metals remains one of the priority groups of pollutants, having both local, regional and global distribution. The main sources of chemical factors in the human body are food, drinking water, air. The toxic effects of chemical elements are related to their absorption in the gastrointestinal tract. Heavy metals remain one of the priority groups of pollutants, having both local, regional and global distribution. The toxicity of heavy metals depends on the concentration, duration of action, temperature, oxygen saturation of water and many other factors. The aim of the experimental study was to investigate the degree of embryotoxicity of cadmium chloride when exposed throughout the gestation period in rats. Object and methods of research. The study was performed on 32 Wistar rats, weighing 180-300 g. At the preparatory stage, the estrous cycle of females was examined by vaginal swabs, which made it possible to obtain females with a dated gestational age. The solution of cadmium chloride was administered to females at a dose of 2.0 mg/kg intragastrically, through a tube once a day, at the same time: the first group – control, the second group – the introduction of a solution of cadmium chloride. The solution of female rats was exposed daily from the 1st to the 19th day of pregnancy. The possible adverse effects of cadmium on embryonic development were determined by the ability to increase embryonic mortality, overall fetal development was assessed according to the tables of normal embryonic development according to Hamburger and Hamilton (НН). To determine the degree of embryotoxicity, the indicators of total, preimplantation and postimplantation embryonic mortality were calculated. The obtained results were processed by the method of variation statistics. The probability of statistical studies was assessed using Student’s t-test. The obtained results indicate the embryotoxic effect of cadmium on embryonic development. The average number of embryos in the group exposed to cadmium chloride is 1.3 times less than the same indicator control values. The embryos of the control group met the criteria of embryonic development according to Hamburger аnd Hamilton (НН). Studies of removed embryos of the 13th day of development of the cadmium group showed a 28.5% lag in the formation of external criteria of embryogenesis, namely: torsion and flexion disorders, lag in the formation of somites. Performing this task, we calculated the indicators of total, preimplantation and postimplantation embryonic mortality. According to the results of the calculations, in the group exposed to cadmium chloride there is a high level of overall embryonic mortality on both the 13th and 19th days of embryonic development. There was an increase in preimplantation mortality when exposed to cadmium on the 13th day to 0.07 ± 0.02 (control – 0.02 ± 0.02) and on the 19th day – 0.15 ± 0.07 vs. 0.01 ± 0.01 in control. Post-implantation mortality also increased significantly in the group of cadmium intoxication. On the 13th day, this figure in the group of cadmium exposure was 0.15 ± 0.03 against the control of 0.03 ± 0.01, and on the 19th day was 0.11 ± 0.03 against the control groups – 0.04 ± 0.02. Accordingly, the analysis of the obtained results proved the high level of embryo toxicity of cadmium chloride at enteral administration at a dose of 2.0 mg/k gin an experiment on rats. 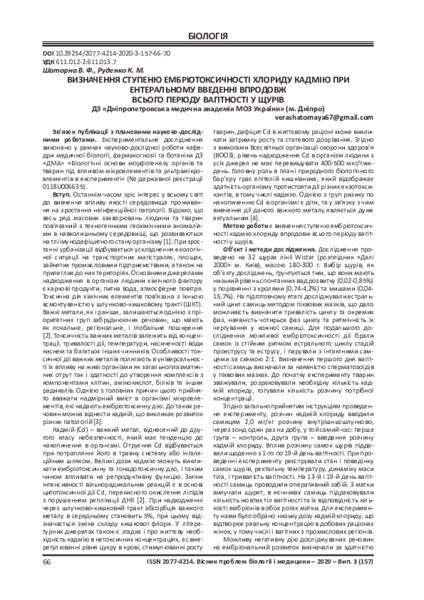