THE CAUSAUTIVES AGENTS OF BLEPHARITIS AND SENSITIVITY TO ANTIBIOTICS

Infectious and inflammatory eye diseases are important issues in modern ophthalmology. Serious problems occur due to inflammatory processes in the cornea and conjunctiva. Frequently the causative agent of the infectious processes is obligate microbiota of the mucous membrane of the eye. Purpose is to study the etiology of blepharitis and determine the sensitivity of pathogens to antibiotics. Object and methods. Patients from the Ophthalmology Department of the Dnipropetrovsk Regional Clinical University Hospital named after I. Mechnikov were enrolled in the study. The experimental group of patients with clinical signs of blepharitis was 85 people; the control group included 80 people. The following methods were used in survey: bacteriological, light microscopy with immersion with staining by Gram, disc-diffusion method for determining the sensitivity to antibiotics, statistical-analytical. Results. We obtained 90 samples from 85 patients. All selected samples were positive for microbiota. Monoculture was obtained in 81 cases; mixed culture we get four times. All isolates which were obtained from the patients were identified by species. The proportion of gram-positive pathogens was 88.2%. The dominant isolate in this group was Staphylococcus aureus, the proportion of this one corresponded to 54.1% vs. 2.0% in the control. Coagulasenegative staphylococci accounted for 27.0% get the follow position after S. aureus. Staphylococcus epidermidis was obtained in 15.1% vs. 30.0% in the control (p = 0.02). Among S. aureus isolates, more than 90% were sensitive to screening with Norfloxacin, others tested for sensitivity to Levofloxacin, Ciprofloxacin, and a positive result was also obtained. These staphylococci were sensitive to both Benzylpenicillin and Cefoxitin in 55.1% of cases, which gives information about the sensitivity to the most beta-lactam antibiotics (including Ampicillin, Amoxicillin). Gram-negative microbiota was isolated as well (15 isolates in total). Klebsiella oxytoca and Klebsiella pneumoniae, Escherichia coli, Enterobacter cloacae, Pseudomonas aeruginosa, Proteus mirabilis were obtained in 4.7%; 1.2%; 5.9%, 1.2%; 1.2% cases, respectively. In this group, sensitivity to all tested fluoroquinolones and gentamicin was shown in 86.6% isolates. It is worth to say, that 56.0% and 30.2% of isolates were tetracycline and Ampicillin resistant, respectively. Klebsiella spp. was resistant to Ampicillin in 98.3% of cases. At the same time, more than 80% of isolates Klebsiella spp. were sensitive to Gentamicin and all fluoroquinolones. In regard to E. coli, the isolates showed sensitivity to Chloramphenicol and resistance to Ampicillin and Tetracycline. Conclusions. Summarizing the results obtained in the experiment, we are able to claim that gram-positive and gram-negative bacteria pose a threat to eye infections and can be one of the main causes of blepharitis. The most common pathogens detected in blepharitis are staphylococci, streptococci, Klebsiella spp., which account from 12.8% to 54.1% of cases. It was found that the etiological agents of blepharitis were also other microorganisms, which showed lower percentage (1.2%-5.9%), but still important (E. coli, E. cloacae, P. aeruginosa, P. mirabilis, K. oxytoca, K. pneumoniae, E. faecalis). It was found that the most pathogens were isolated as monocultures in 95.3% of cases and only we had mixed cultures in 4.7% of cases.

blepharitis, sensitivity to antibiotics, the causative agents of blepharitis. 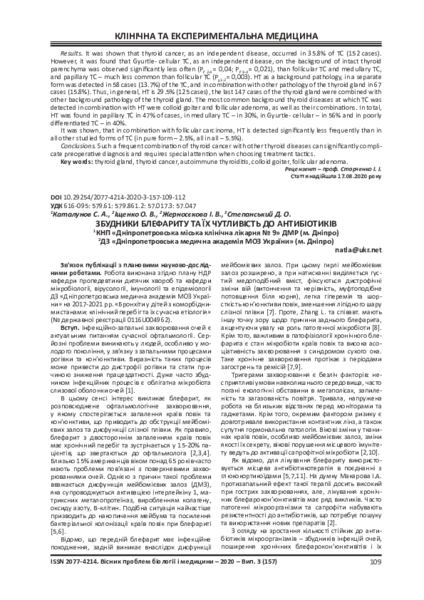