THE ROLE OF INFORMATIONAL DEADAPTATION IN OBSESSIVE-COMPULSIVE DISORDER IN WOMEN

As part of the search for mechanisms of adaptation, new mechanisms of psychological protection against the influence of information stressors are constantly being born and modified. The state of the information sphere of adaptation in women with obsessive-compulsive disorder has been conducted and studied. It was found that difficulties in adapting to changing societal demands, lack of flexibility and tolerance in responding to information stress, result in the spread of psychogenic pathology and states of psychosocial maladaptation, accompanied by confusion, anxiety, depression, protests, and quality of life. Psychosocial maladaptation of varying severity is observed in the vast majority of patients suffering from obsessive-compulsive disorder. A sign of adaptability is the ability to self-awareness and role behavior, self-control and self-service, adequate communication with others in full. The risk of psychosocial maladaptation is evidenced by the presence of unsystematic, isolated manifestations of psychological discomfort due to difficulties in adapting to certain life circumstances. As a rule, it is a matter of dissatisfaction with the existing status due to somewhat higher ambitions. The mild severity of psychosocial maladaptation is accompanied by the inability to fully exercise self-control and selfcare, to create adequate communication with others. As a rule, this is a single isolated lesion of functionality, which is only partially compensated by the activation of protective psychological mechanisms, being the cause of certain suffering for the individual. The average severity of psychosocial maladaptation occurs in the case of inability to cope with key problems arising from abrupt changes in living conditions. The cause of suffering, as a rule, is not so much the low level of adaptive functioning in a certain field of activity, as the negative dynamics compared to the previous status. For example, people with consistently low incomes often do not show signs of maladaptation of an economic and property nature, in contrast to people with higher incomes, who, however, have recently suffered some financial losses. Manifestations of maladaptation cover several areas of activity, mutually potentiating the negative impact on functioning and leading to psychological discomfort. This is often accompanied by subclinical symptoms of anxious and obsessive-phobic nature, obsessive thoughts about their own miscalculations, ideas of guilt, fear of failure, insecurity. Severe levels of psychosocial maladaptation occur in the case of global transformations that occur in subjectively extremely important areas of activity and are not accompanied by sufficient compensatory responses. All manifestations of response to a problematic situation become markedly dominant and this leads to a violation of the usual balance between different areas of psychosocial activity. As a result, even initially local stress acquires signs of total defeat of adaptive mechanisms. Psychosomatic response mechanisms are accompanied by abundant autonomic symptoms. Characterized by the rapid development of clinically delineated neurotic and psychosomatic disorders, sometimes the depth of adaptation disorders leads to the development of psychopathology of the psychotic register. Mostly there is a defeat of information and communicative functioning. There is a vicious circle in which the imperfection of adaptation mechanisms creates vulnerability to the influence of information factors and this leads to the development of psychogenic pathology, and the psychopathological process, in turn, further impairs the adaptive mechanisms of the psyche. 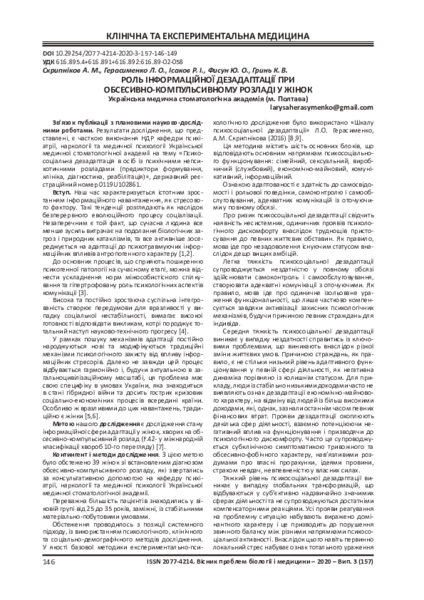