Diabetes mellitus (DM) is included in the triad of the most common diseases today, which are the most common causes of disability and death of patients, which is associated with severe complications and high mortality among the working population. According to the scientific literature, a number of authors have studied the changes in neuromuscular connections (NMC) in DM in the tongue, skeletal muscles, masticatory muscle. However, we have not found the researches, that would study the changes in NMC in DM in the postnatal period of ontogenesis. Therefore, the aim of our study was to investigate morpho-functional changes in the temporomandibular muscle in 2-month and 6-month-old rats in experimental DM type 1. The material for the study were the masticatory muscles of 16 immature (weighing 65-95 g) and 16 mature (weighing 160-180 g) white outbred male rats, which were divided into 2 groups: control (12 animals) and experimental (20 animals). Streptozotocin diabetes mellitus (SDM) in the experimental group was simulated by a single intraperitoneal injection of streptozotocin at a dose of 7 mg per 100 g of body weight in immature animals and 6 mg per 100 g body weight in adult animals. The material was taken on the 28 and 70 days of the experiment. Histochemical (BolshevskyGross impregnation), biochemical and electron microscopic methods were used. Photographs of histochemical sections saved in tif format and digitized electrograms were used for morphometric studies. Morphometry was performed using ImageJ version 1.47t. Computer data processing was performed using the statistical package STATISTICA (StatSoft, Inc. (2010), STATISTICA (data analysis software system), version 10. In the early stages of the development of SDM (28 days), we already observed destructive-dystrophic changes in the myelin nerve fibers and neuromuscular endings (NME) of the temporal muscle of different age groups of animals. There was a decrease in the sparing of the terminal parts of the axons, a decrease in the area of the NME by 26% in 6-month and 41% in 2-month rats. In this case, neuromuscular synapses (NMS) showed significant resistance to the pathogenetic effects of hyperglycemia. All their components are relatively well saved. However, according to morphometry, the following changes were studied in 2- and 6-month-old rats: the area of the NMS decreased by 37.3% and 25.2%, the area of the folds of the synaptic membrane decreased by 41.7% and 33.3%; the number of folds of the synaptic membrane decreases by 30.8% and 24.2%, which leads to an increase in the distance between them by 2.7 times and 1.6 times; the number of synaptic vesicles also decreases by 44.1% and 22%. As the duration of SDM increases to 70 days in 6-month rats, destructive processes in the nervous system of the temporalis muscle increase. Among the intramuscular efferent nerve fibers, areas of thinning of the myelin sheath are observed over a significant period of time, which may indicate the initial signs of segmental demyelination and is confirmed by electron microscopic studies. Most NME are destroyed, their sputum decay decreases. In separate terminal branches of axons the presynaptic pole is shown in the form of separate components of axoplasmic contacts. In this case, the synaptic folds in some NME completely disintegrate. In contrast, in 2-month-old animals, BolshevskyGross impregnation reveals primitively shaped thin terminals, which additionally leave from nerve trunks that can be attributed to newly formed or secondary branches of motor axons, which indicates the development of compensatory processes in NME of this experimental group. It should be noted that the sprouting of terminal branches of axons in 2-month-old animals is 3 times more likely than in 6-month-old rats (p <0.05). Conclusion. At SDM in dynamics of changes of NME of a temporal muscle of 6 months rats can be divided into 2 stages: reactive-compensatory (28 days) and atrophic-destructive (70 days). In 2-month-old rats with SDM, also, we can distinguish 2 stages of the course of changes: reactive-hypotrophic (28 days) and compensatory (70 days). 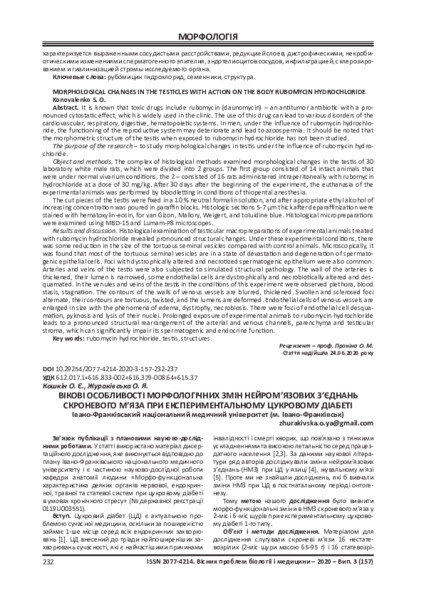