Three enzyme systems are involved in the metabolism of ethanol, which oxidize ethanol to acetaldehyde, which is a toxic by-product and damages tissues. The effect of ethanol on the organs of the digestive system is indisputable, so to objectify changes in the parenchymal and stromal components of the salivary glands allows electron microscopic examination. Materials made on 20 white outbred rats were used for its implementation. 10 animals were a control group, which was administered 4 times a day isotonic sodium chloride solution, and 10 – experimental, which was administered 4 times a day at 12 mg/kg 40 o ethanol. Animals were removed from the experiment on day 5. Pieces of the submandibular glands were enclosed in epon-812 according to conventional methods. Ultrathin sections were made on an ultramicrotome LKB-3 (Sweden). Contrast sections were performed first in a 1% solution of uranyl acetate in methanol, and then in lead citrate according to Reynolds. We studied in an electron microscope TEM – 125 K (serial number 38-76, TU 25-07-871-70) at an accelerating voltage (50-75) kW. In the electrograms of the mandibular glands of control rats in seromucosal cells, a nucleus with a large amount of euchromatin, a clear nucleolus and a large number of pores in the karyolema confirms signs of constant transcriptional processes, formation of a large number of ribosomes and active import and export through the nucleus. The granular endoplasmic reticulum fills almost the entire part of the perinuclear cytoplasm with the adjacent Goji complex where posttranslational processes take place and as a result the entire apical part of the cytoplasm is filled with granules whose contents enter the lumen of the terminal compartments by exocytosis and will enter the end saliva. Due to acute ethanol intoxication on the 5th day of the experiment, the vessels of the interstitial tissue of the resistive and metabolic links reacted with a sharp spasm, which was confirmed on electron patterns by deformation of blood cells in capillaries, explosion of vascular endothelial cells and shortened smooth myocytes. The bundles of collagen fibers were separated by thick layers of amorphous substance. Vessel spasm of the hemomicrocirculatory tract leads to inhibition of salivation to ensure sufficient hydration of the oral cavity to which the end cells respond by increasing the secretion process, as evidenced by an increase in the amount of euchromatin in the nucleus and the appearance of a large number of secretory polymorphisms. The processes of myoepithelial cells were elongated with pronounced myofilaments. In the epitheliocytes of striated ducts there was an increase in the number of mitochondria, which indicates their increased activity in the transfer of sodium ions against the concentration gradient in the sensory interstitium and the appearance of dilated intercellular spaces as a phenomenon of enhanced juxtacellular transport of water from interstitial tissue to interstitial tissue. Thus, in the initial stages of the study, the action of alcohol causes significant changes in both parenchymal elements and vessels of the hemomicrocirculatory tract, which is expressed by increased secretion in the terminal compartments and increased functional activity of the duct system, which provide watering and modification of saliva. 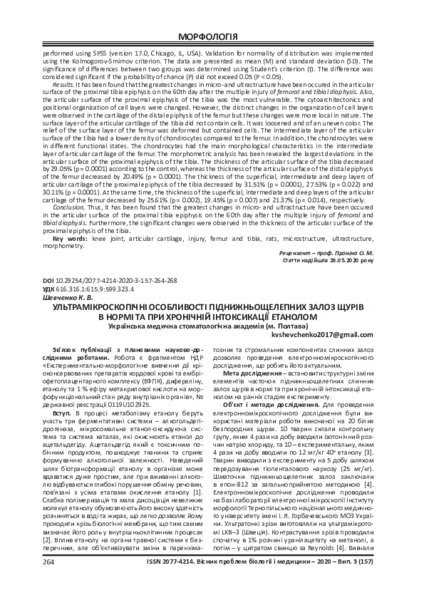