Bulletin of problems biology and medicine / Issue 3 (157), 2020 / QUALITY OF PROVIDING DENTAL CARE TO «DNIPROSPETSSTAL» PLANT EMPLOYEES ACCORDING TO THE SOCIOLOGICAL RESEARCH
Vozna I. V.

The work is based on the survey’s results of 178 employees, including 86 (48.3%) men and 92 (51.7%) women. These were respondents aged 35-60 who received periodontal and orthopedic dental care. All the respondents were divided into the following age groups: from 35 to 45 years 32 (18.0%); from 46 to 55 years 85 (47.7%), from 56 to 60 years 61 (34.3%) persons. The sociological investigation among the employees was conducted on specially designed questionnaires, which consisted of 15 questions. The materials of our study indicate, that 99 (55.6%) respondents answered the main reason for visiting the dentist was the need for dental prosthetics, 19 (10.7%) workers called the reason as «bad breath», 31 (17.4%) said «bleeding from the gums», another 29 (16.3%) respondents noted, that the reason for treatment was the mobility of the teeth. Answering the questionnaire «Have you ever been treated for periodontal tissue?» the vast majority of the respondents 65.73% answered negative, and 34.27% of the respondents answered positive. At the same time, to the questionnaire «What means did you use to treat gums?» such answers were recorded as: rinsing – 47.19%, ointments – 30.89% and only 21.92% of the respondents answered – a set of tools! In turn, 18.0% of the patients do not know whether their dental plaque was removed? The patients (46.6%) answered, that their dental plaque was removed with a hand tool and 35.4% by means with ultrasound. The complexity and completeness of treatment are important indicators of the dental care’s quality. The majority of the respondents, 73.03%, need dental prosthetics, as previously, in the process of periodontal tissue treatment, mobile teeth were removed and only 14.0% noted, that they underwent splinting. At the same time, such single answers as the treatment was incomplete were recorded. In our opinion, the cause of defective treatment was the result of incorrect doctors’ tactics in the therapy of periodontal diseases. Answering the questionnaire «What orthopedic structures do you have?» the vast majority of the respondents 58.4% answered, that fixed prostheses, 29.2% said removable prostheses and only 12.4% noted no prostheses. In turn, 23.6% of the respondents indicated, that their dentures were made in a month after tooth extraction, 33.1% said, that in six months, 24.1% in a year and 19.2% noted, more than a year. The respondents (66.8%) were satisfied with the quality of previously performed dental prosthetics, and 33.2% complained of the orthopedic treatment. The respondents (82.0%) did not suit the appearance of the prosthesis (aesthetics) and only 20.0% of the patients did not like functional relation of the prostheses. Thus, only 29.1% of the male respondents believe, that they need aesthetic designs, while among women this figure was 76.1%. Choosing an orthopedic design, the dentist-orthopedist did not always discuss the construction with the patient. This was noted by 60.7% of the respondents and only 39.3% said, that they’ve discussed options of orthopedic design. With the increase of the respondents’ age, there is a clear decrease in the share of people, who express claims due to the aesthetic reasons (from 90.6% – in 35-45 years age group to 4.9% – in the age group over 55 years) and we’ve a definite increase in the number of the patients in connection with functional disorders of chewing (from 9.4% – at the age of 30-45 years to 95.2% – at the age over 46 years). Conclusions. Thus, the materials of our sociological study have showed, that «Dniprospetsstal» plant employees are not always satisfied with the quality of periodontal and orthopedic dental care. This is due to the employees’ insufficient attention to their dental health, low level of general sanitary culture and lack of comprehensive periodontal treatment. 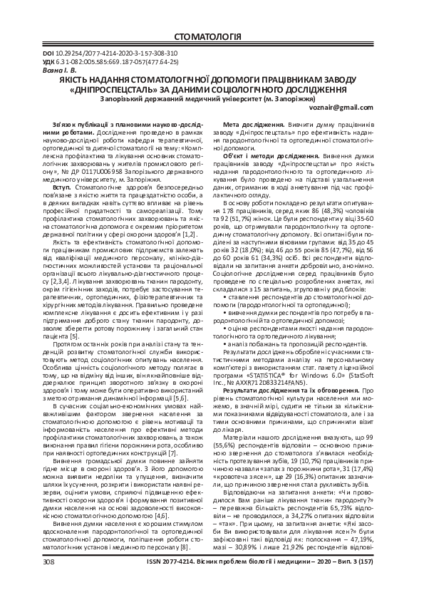