The study of the functioning peculiarities of the components of orofacial system needs considerable attention. It is important to understand the individual characteristics of the masticatory muscles in accordance with the somatotype, which allows to correctly determine the norm for each patient, choose the optimal, effective treatment plan and check treatment results. At the same time, these data are not found in the literature.The aim of the research was to determine the features of EMG-activity of masticatory muscles in young people without malocclusion and correlation to somatotype. Object and methods of research. The study group consisted of 42 adults of different somatotypes. The average age of subjects was 22.2 ± 1.82 years. There were 18 (42.9%) men and 24 (57.1%) women. By somatotype, patients were divided: normosthenics – 12 (28.6%), hypersthenics – 15 (35.7%), asthenics – 15 (35.7%). All examined patients did not have somatic pathology and morphological, functional or aesthetic disorders of orofacial region. The somatotype of the subjects was determined by L. Rees- H.J. Eisenk index (1945). All patients were performed superficial electromyography (EMG) of temporal and masseter muscles, according to recommendations of Ferrario V. F., Sforza C., Tartaglia G. M., using a 4-channel computerized electromyograph Synapsis company Neurotech (Russian Federation). Maximum amplitude, average amplitude (μV) and surface contractions (μV*ms) were analysed. The data obtained during the recording of the EMG study were processed using Synapsis software from Neurotech. Statistical method was performed with the calculation of the arithmetic mean value, its error. The level of reliability between the indicators and the amplitude of the same on the left and right sides was assessed using a nonparametric Student’s test. Results with an error level of p≤0.05 were considered statistically significant. Research results. The study made possible to determine the features of EMG-activity of the masticatory muscles in patients of different somatotypes. In all tests electromyographic curve had the form of alternations of rest phase and activity phase without splash activity. The rest phase was characterized by minimal insignificant bioelectric activity (up to 8 μV) with a sharp burst in the activity phase. Increased maximum amplitude of EMG-activity was found in all subjects in maximum voluntary clenching test, compared with other tests. In normosthenics and asthenics, the EMG-activity of temporal muscles did not differ significantly (p> 0.05), the EMG-activity of masseter muscles was higher among normosthenics (p <0.05). The highest values of EMG activity of both temporal and masseter muscles were determined in hypertenics (p <0.05). In the majority of normosthenics – 9 (75.0%) symmetrical EMG-activity of masticatory muscles on the right and left sides was determined, but among asthenics only in 8 (53.3%) subjects, among hypersthenics – in 6 (40,0%) subjects symmetrical EMG activity was noted. Conclusion. 1) in hypersthenics there were significantly higher indicators of EMG-activity of masticatory muscles in comparison with normosthenics and asthenics (p <0.05); 2) in asthenics the lowest indicators of EMG-activity of masticatory muscles were observed in comparison with hypersthenics and normosthenics; 3) in normosthenics there was a more proportional distribution in the activity of the masticatory muscles on the working and balancing sides than the temporal muscles (p <0.05); 4) the largest percentage of normosthenics (72.7%) had symmetrical muscle work on the left and right sides. At the same time, in hypersthenics such meanings was only in 44.4% of subjects. 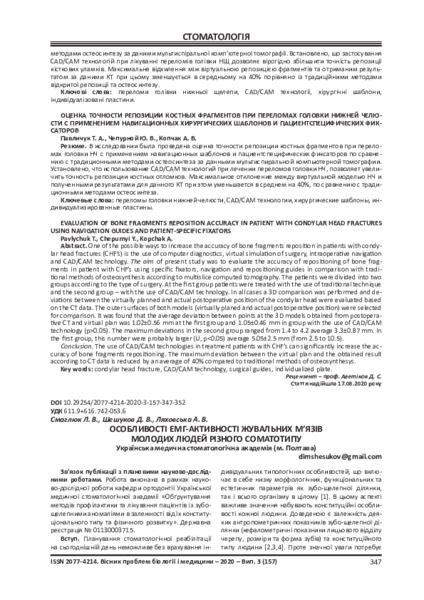