Bulletin of problems biology and medicine / Issue 4 Part 1 (153), 2019 / DURING PREGNANCY ON THE BACKGROUND OF RETROCHORIAL HEMATOMA
Azizova N. A.


DURING PREGNANCY ON THE BACKGROUND OF RETROCHORIAL HEMATOMA

Retrochorial hematoma is a specific pathological condition that occurs in the early stages of pregnancy, usually in the first three months of its development. According to ultrasound, the frequency of retrochorial hematoma in the first trimester is 4-22% of the number of all pregnancies. In 9-23% of patients with retrochorial hematoma, pregnancy ends in interruption. In case of prolongation of such pregnancy, the risk of neonatal and maternal complications increases: premature birth (16-19%), fetal development delay (7%), newborn distress syndrome (19%), preeclampsia (8%). Currently, it is recognized that the cause of the formation of retrochorial hematoma is the immunological conflict of mother and fetus, which is associated with the activation of immunomodulatory mechanisms regulated by progesterone. Bleeding during pregnancy actualize the problem of pregnancy. Cytotrophoblast invasion is a complex process that has been formed over the course of evolution. The most important periods of trophoblast invasion are the first (6-8 weeks) and the second (16-18 weeks) wave. Chorion detachment in the early stages of pregnancy, as a rule, is a consequence of endotheliopathies, immunological, immunogenetic, hemostatic and hormonal disorders. According to modern ideas, before 8-10 weeks of gestation, the first wave of invasion of the villous cytotrophoblast into the placental bed occurs, which within 8-12 weeks spreads to the endometrial segments of the spiral arteries and causes the formation of a permanent utero-placental blood circulation adequate to the needs of the embryo. Pathology of gestational rearrangement of the spiral arteries of the placental bed is explained by incomplete transformation of the endometrium or insufficient invasion of the cytotrophoblast, whose activity primarily depends on hormonal relationships. The main pathogenetic link and factor of bleeding before the 12th week of pregnancy is insufficient invasion of cytotrophoblast. In the presence of retrochorial hematoma, didrogesterone is prescribed at a dose of 10 mg 3-4 times a day until the bleeding stops and the hematoma is organized. Then the dose of didrogesterone can be reduced to 20 mg/day, and therapy continues for up to 16 weeks pregnancies. With the use of didrogesterone, it is possible to reduce the frequency of threatening termination of pregnancy, avoid detachment of chorial tissue and fetal membranes and spontaneous miscarriages. The tactics of the first trimester of pregnancy in women with miscarriage and retrochorial hematoma include hemostatic therapy. If necessary, relief of bloody secretions from the genital tract has undeniable advantages tranexamic acid. Therapy with tranexamic acid begins with intravenous administration of 1 g of the drug, then step-down therapy is carried out-a gradual decrease in the dose with the transition to a tableted dose of 250-500 mg 3 times a day. Under the action of tranexamic acid, plasminogen inhibition, blockade of plasmin-fibrin interaction, stimulation of collagen synthesis occurs. Due to this mechanism of action, the drug demonstrates high clinical efficacy. In the complex therapy of threatened abortion, it is advisable to include magnesium preparations. Recent years have been characterized by a revival of interest in magnetotherapy, increased due to pharmacological evidence of its potentiation with pyridoxine hydrochloride 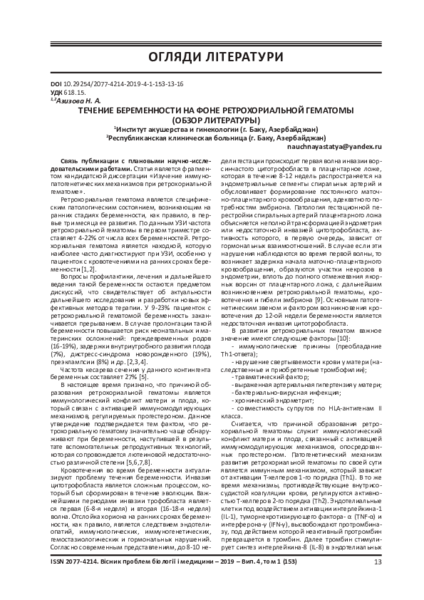