The incidence of burns and fatality among burned people is increasing in many countries around the world. Common to burns is the area of tissue damage and spread to the depth of the lesion. The mechanism of damage is different; it is determined by the active agent on the tissues and the duration of its action. In case of burn disease there is a disturbance of the processes of exchange in different organs and systems. In our opinion, the issue of redox reactions in the salivary glands in the conditions of experimental burn disease is quite relevant. In oxidation-reduction phosphorylation in tissue cells with oxygen-saturated end products of metabolism (free radical singlet oxygen, and NO2 and other free radical compounds) come out. In case of disorder of the supply of O2 in these conditions, the energy consumption of oxygen by the cells for a short time is satisfied due to limited energy reserves in the form of adenosinetriphosphoric acid, creatine phosphate and glycolysis (anaerobic process). This produces lactate, which cannot be recovered from the tissues. Such processes lead to intracellular acidosis and impaired cellular metabolism. Against this background, tissue hypoxia develops. Such processes impair the integrity of the mitochondrial membrane, which can lead to the death of cellular inclusions due to the excessive accumulation of metabolic products. The purpose of the study was to investigate disorders of energy metabolism in salivary gland tissues in experimental burn disease. Object and research methods. The studies were performed on 125 adult white rats weighing 170-220 g, and burn disease was modeled by the Dovgansky method. The size of the damage area was determined by the area of the skin. The lesion area was calculated using N.I. Kochetigov’s table. These studies were compared with the tissues of the intact group.In the tissues of the salivary glands of rats under conditions of experimental burn shock indicators of tissue respiration and oxidative phosphorylation were determined. Respiratory and phosphorylation activity of mitochondria was determined by V. Chance and G.R. Williams. Results of the study and their discussion. In conditions of experimental burn disease after the performing of burn shock in the acute period during the 1st day increase of the activity of tissue respiration V3 in 2 times was observed in the rats salivary glands tissues (in comparison with the control group). We found a decrease in the activity of tissue respiration V3 in the salivary glands tissues during the period of acute toxemia on the 7th day by 45%; on the 21st day by 60%. This indicates that the systems of compensation of the organism are depleted and enough metabolism does not occur, which leads to the accumulation of metabolic products in the salivary glands tissues. According to our data, on the 28th day, there is an increase in the activity of respiratory control in the tissues by 80% relative to the 21st day. On the 7th day there is an 80% inhibition of tissue respiration. Conclusion. Thus, it was established that in the burn shock stage in the salivary gland tissues there is a violation of the processes of oxidative phosphorylation due to the accumulation of nonspecific toxins, which include components of the chinine and prostaglandin system. These low molecular weight components affect the processes of both tissue metabolism and the respiratory chain in salivary gland tissues. Therefore, as in the salivary glands, the processes of tissue respiration is an energy-dependent cycle, the deterioration of the respiratory cycle occurs at disorder of the phospholipids formation due to the accumulation of metabolic products. 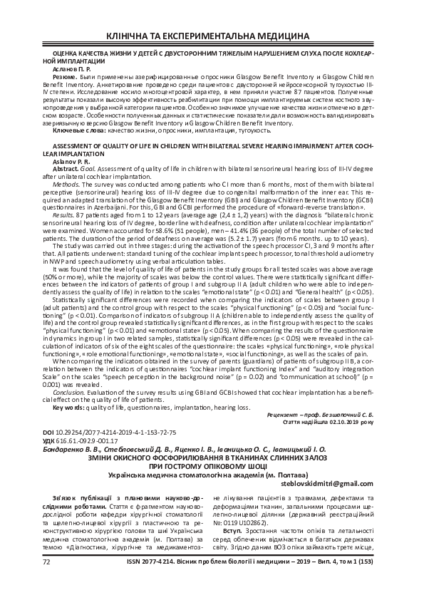