Bulletin of problems biology and medicine / Issue 4 Part 1 (153), 2019 / DEPENDENCE OF A RISK OF ORAL ABNORMALITIES IN ADULTS BORN MACROSOMIC ON THEIR HEIGHT-WEIGHT INDEX AT BIRTH
Garmash O. V

The paper is concerned with the data acquired in a survey of 114 18–55-year-old persons in the City of Kharkiv and adjacent areas, who were born with a fetal macrosomia (Main Group) and corresponding age persons with normal birth weight (127 persons), who are included into the Comparison Group. The participants in the Main Group are then divided into 4 subgroups, accounting their weight-height index at birth. The questionnaire, which we have designed, permits us to estimate the degree of risk of periodontal tissue and of hard tooth tissue pathology associated with perinatal pathology in the past history, heredity, oral hygiene, concomitant pathology, the constitution of the person, bad habits, nutrition, drug therapy, and physical load on the individuals whose birth parameters were higher than normal. Сonclusions. A greater part of research has confirmed the data previously reported about macrosomic-at-birth adults who have significantly more oral health complaints than normosomic-at-birth have. The influence of the level of oral hygiene, bad habits, and the nature of the nutrition and physical activity of the persons who have these complaints is not confirmed (no reliable differences at the level of groups or subgroups have been observed). However, the prenatal period, which was different, and the state of somatic health that formed, are necessary prerequisites for dental status to become specific for each subgroup. The macrosomic-at-birth individuals born with signs of intrauterine obesity (subgroup IV) have a risk of development of periodontal tissues and hard tooth tissue pathology higher than the others have.The macrosomic-at-birth individuals who at the time of birth had a well-balanced development (Subgroup I) had more than three times higher percentage of premature eruption of deciduous or permanent teeth, relative to the comparison group. Such individuals were significantly more likely to report a periodic or persistent dry mouth, periodic or persistent gum bleeding, and bad breath. The macrosomic-at-birth individuals who had a large body length and a relatively low body weight at birth (Subgroup II) have reported significantly more complaints about hypertension. They are sick for a long time and take medicines more often. They are significantly more likely than persons in the comparison group to have delayed terms of deciduous or permanent teeth eruption, periodic or permanent bleeding of the gums, and more often complain about pain or crunching in the temporomandibular joints. The macrosomic-at-birth persons, who at the time of birth had a large body length and intrauterine obesity (Subgroup III), have the highest percentage of cases of complaints about teeth hypersensitivity to various stimuli. The macrosomic-at-birth persons, who at the time of birth had an average body length and intrauterine obesity (Subgroup IV) on average, were more likely to be sick for a long time more often, had a higher percentage of cases of allergic diseases, and were more often than the persons in the comparison group born not from the first labor. The individuals in this subgroup were significantly more likely to have malocclusions, and they had a tendency to increase the number of complaints about the teeth hypersensitivity 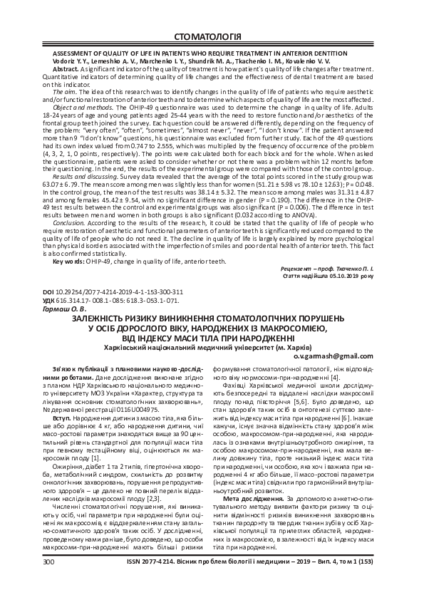