The article presents data on the number, type and nature of microflora in patients with purulent-inflammatory diseases of the maxillofacial region. The originality of the microbiocenosis of the oral cavity is due to the fact that living in this ecological niche of microflora is influenced by numerous environmental factors and regulatory, protective mechanisms of the macroorganism. The purpose of the study is to determine the composition of abscess microflora and the phlegmon of the maxillofacial area to evaluate its sensitivity to widely used antibiotics in patients living in the Poltava region. Object and methods. In our study, there were 188 patients with acute purulent diseases of the maxillofacial area between the ages of 18 and 74 years. The ratio of odontogenic inflammatory diseases to non-odontogenic diseases was 3:1. In case of odontogenic inflammatory diseases, the molar of the mandible was 61.8% of cases, the molars of the upper jaw were 19.1%, the lower premolars were 4.4%, 7% are upper premolars, 2.2% are lower incisors, 2.1% are upper incisors and 0.7% are upper jaw canines. In the first stage of the study, microflora characteristic of the oral cavity of healthy residents of Poltava region with intact dental rows and without concomitant pathology were studied. Analysis of the microbial spectrum revealed that most of the microbial landscape of the oral cavity is composed of different types of facultative anaerobic bacteria, non-fermenting gram negative bacteria. In addition, the absence in the oral cavity of Staph. aureus, Str. pyogenes, Bacillus, Fusobacterium, Peptostreptococcus, Peptococcus, Streptobacterium, Clostridium are sown in residents of other regions of Ukraine. To study the peculiarities of oral microflora in the development of purulent-inflammatory diseases of the thyroid gland microbiological studies were performed in patients treated in the maxillofacial department of CP " POKL them. 38 people were surveyed, in the Khorol district – 6, in the Lubny district – 5, in Kremenchuk – 15, and the rest were residents of the countryside. In the next stage of the study we studied the sensitivity of cultures isolated from purulent foci in the maxillofacial area to antibacterial preparations of groups of enicillins, cephalosporins, tetracyclines, aminoglycosides macrolides, levomycetin, rifampicin. The results obtained indicate 100% sensitivity of all microorganisms isolated in patients with jaw periostitis to cefotaxime, moderate sensitivity of most microorganisms to ampicillin, gentamycin and rifampicin, and lack of sensitivity of most microorganisms to microorganisms. The revealed facts indicate that the number, type and nature of the microflora change significantly in the examined patients at different ages. In addition, it is noted that the characteristics of the microflora of the oral cavity of patients which significantly depends on the prevalence of purulent-inflammatory process. The greatest sensitivity of pathogens of purulent-inflammatory processes of thyroid cancer patients living in the Poltava region, was found to cefotaxime and gentamicin, and the least – to lincomycin, rifampicin and erythromycin. In further studies, it is planned to determine the reduction in bed days of inpatient stay with purulent-inflammatory diseases of the maxillofacial area after prescribed treatment with determination of the composition of the microflora. 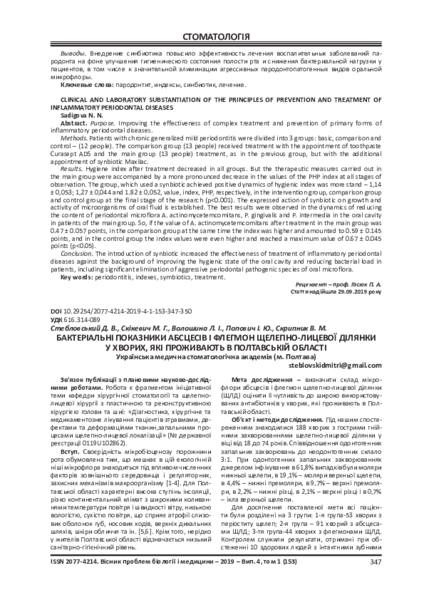