The review is devoted to one of the urgent tasks of our time – the morphological diagnostics of tuberculosis in association with HIV infection. The last decades in Ukraine there has been a continuous increasing of the incidence of cases of co-infection, which makes it important a diagnosis in-time, and that is reflected in a number of publications. Modern approaches to the morphological diagnosis of tuberculosis/HIV are presented, which prove that the histological signs of a tuberculosis lesion depend on the priority of infection of patients by HIV or TB (HIV/TB or TB/ HIV), on the degree of immunodeficiency, and possible joining of other secondary infections. There are presented studies in which it was established that in the case of a primary infection by HIV infection, and then tuberculosis, the generalized forms of the latter predominate, atypia of morphological changes in lung tissue is observed, with a predominance of alterative-necrotic manifestations and a weak granulomatous reaction. On the contrary when primary infection is tuberculosis, and then HIV, in the lung tissue signs of a specific inflammatory process in the form of fibro-cavernous or disseminated pulmonary tuberculosis usually remain, although the morphological signs of progression of tuberculosis in the form of caseous pneumonia are revealed simultaneously. It is noted that the main morphological characteristic of the lungs during co-infection is the varying degree of loss of morphological signs specific for tuberculosis, which depends on the level of immunodeficiency, the last is determined by CD4 + lymphocyte count in the blood. With immunodeficiency with a level of CD4 + cells in the blood less than 150200 cells/μl, the morphological picture of the lungs becomes similar to abscess pneumonia with a significant necrotic component, single granulomas and the absence of multi-nuclear giant cells. In case of mild immunodeficiency (the number of CD4 cells is more than 500/μl in blood), typical granulomatous inflammation is observed in the lung tissue. Modern histological methods for identifying of acid-resistant bacteria in tissues that are used in practical medicine are presented, but their common drawback is the impossibility of determining the type of mycobacterium. The latter remains the prerogative of microbiological research. There is evidence that the joining of numerous opportunistic infections in patients with co-infection, especially in the late stages of HIV, greatly complicates the diagnosis and often leads to a delay in correct diagnosis. For early timely diagnostics of tuberculosis at co-infection, it is most appropriate to perform a set of diagnostic procedures, in particular, modern fast molecular genetic, immunological diagnostic methods, which in cases of uncertainty of the results, require the additional use of classical and improved morphological methods for diagnosing tuberculosis. 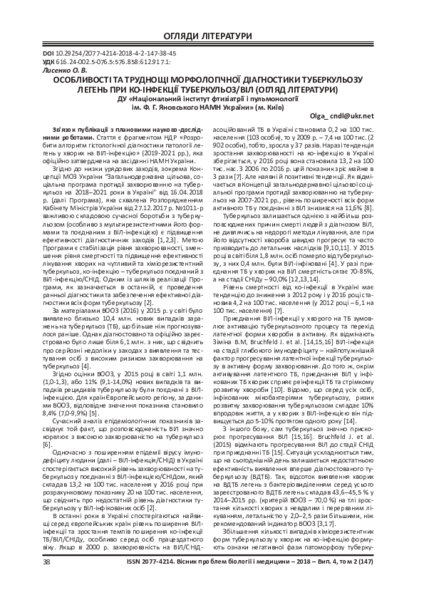