More than 80% of genome genes are involved in development of the human brain that is much greater than the need for the formation of any other organ in human body. Mutations of one or more of these genes may cause brain damage and mental diseases. One of these diseases is bipolar disorder, or manic-depressive psychosis – serious and widespread mental disorder. Currently its global frequency varies from 0.4% to 1.3% according to different sources. The ratio between women and men is 5:4. Bipolar disorder is a disease with hereditary predisposition. The coefficient of heritability as a fate of the genetic component of the disease is about 46%. Thus, the impact of environmental conditions on risk of the disorder developing reaches 54% that indicates a possibility of successful treatment of some of its forms. The bipolar and related disorders occupy an intermediate position between schizophrenia and other depressive and psychotic diseases. Due to these features, its diagnosis is quite complex and approximate. To study the genetics of bipolar disorder there are used genealogical methods (family, twin, and adoption studies), linkage studies, a search of candidate genes, genome-wide association studies its. Genome-wide association studies and meta-analysis of experimental data are most effective research technology. Making use of this technology, 5 genes (ANK3, CACNA1C, ODZ4, TRANK1, ADCY2), whose mutations are directly involved in the risk of developing the disease, have been identified at this time in large combined samples of patients with bipolar disorder and controls. The ANK3 gene (10q21) encodes the ankyrin G protein, which is involved in formation of an initial axon segment. The CACNA1C gene (12p13.3) encodes a protein that is part of the calcium ion channels. The ODZ4 gene ((11q14.1)) encodes a protein that is involved in the development of neurons and axonal myelinization. The TRANK1 gene (3p22.2) encodes a protein that is sensitive to propylvaleric acid. The ADCY2 gene (5p15.31) encodes the membrane adenylate cyclase enzyme, which plays a key role in the pathway of receptors of a number of neurotransmitters. There are also 9 genes that are expressed in the dorsolateral zone of the prefrontal cortex of patients with bipolar disorder and 6 functional pathways that can cause susceptibility to disorder, namely, signaling pathways of glutamate, corticotropic hormone, endothelin 1, phospholipase C, β-adrenaline receptors and myocardial hypertrophy. These data can play a key role in determining the direction of pathophysiological research to develop effective methods for treatment of bipolar disorder. In addition, single-nucleotide polymorphisms have been identified in 3 circadian genes (NF1A, CRY2, NPAS2) that affect the daily rhythm of changing episodes of the disease. The product of the NF1A gene (1p31.3) is involved in the DNA transcription and replication. The CRY2 gene (11p11.2) expresses in all body tissues and encodes cryptocchrome-2 protein, which is involved in regulating the functions of light-dependent proteins and preserving daily rhythmicity. The NPAS2 gene (2q11.2) encodes a protein that is involved in providing feedback between neurons. There is shown that single-nucleotide polymorphism rs6738097 in the NPAS2 gene can be used as a biomarker of bipolar disorder dependent on disruption of the daily rhythm. 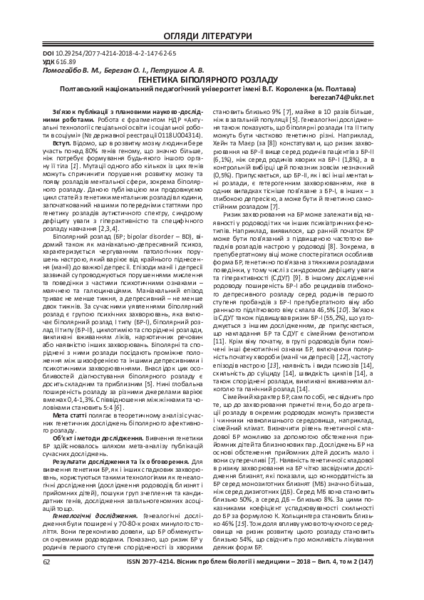