Usage of different xenobiotics, in particular ionizing radiation, for the modification of growth properties of pollen tubes is widely spread due to the possibility to apply gamma-irradiated pollen for mutagenesis and apomixis induction as well as transgenosis implementation. In view of this, studying gamma-irradiated pollen germination and growth in vitro would be helpful not only for the determination of ionizing radiation effects on pollen but also elucidation the special features acquired by pollen through gamma-irradiation in wide dose range. The research aimed at analysis of dynamics and kinetics of Nicotiana alata pollen tubes formation and further growth on the artificial nutritional medium consisted of 10% sucrose and 0,01% boric acid in sterile tap water at +28°C and luminescent illumination of 800 lx. Pollen was collected before anthesis and irradiated in dry state by gamma-rays in the dose range 5 – 3000 Gy. Application of pollen drop culturing made possible us to follow the dynamics of pollen germination and pollen tube growth in vitro. Thus, unirradiated control pollen was shown to germinate rapidly within three hours after sowing on the water solution of nutrients, the latent period before germination being equal to half an hour. Gamma-irradiated by 5 Gy Nicotiana alata pollen proved to be of the same germination qualities as control. Meanwhile gamma-irradiation of pollen by 300 Gy caused the increase of latent period before pollen germination up to 1,2 hr, the whole germination term reaching 7 hr. Simultaneously the percentage of germinated pollen decreased to 62% comparing with control where pollen germination was equal to 82%. The further radiation dose elevation resulted in gradual elongation of latent period before pollen germination up to 2,8 hr at the dose of 800 Gy and 3,8 hr at the dose of 1500 Gy. Apart from this, pollen gamma-irradiation stipulated the slowing of pollen tube formation, the latter being equal to 5,2; 2,5 and 0,7 pollen-tubes/hr at 800 Gy, 1200 Gy and 1500 Gy, respectively. Analysis of pollen-tube growth dynamics has elucidated that in control this process proceeded in five steps. At stage 1 pollen-tubes immediately after germination commenced to grow rapidly during 2,5 hr. Afterwards pollentube growth slowed down. By 8th hr of pollen cultivation in vitro the second raise of pollen-tube growth velocity appeared which continued within three hours and resulted in evident elongation of pollen tubes up to 92% of their final mean. At the fourth stage pollen-tubes reached their final length and entered the termination period (stage 5). Gamma-irradiation of tobacco pollen by 5 Gy did not change the shape of pollen-tube growth curve. However, dose increase to 300 Gy resulted in decrease of stage 3 duration associated with second raise of pollen-tube growth velocity. Further radiation dose elevation sequentially to 800 Gy, 1200 Gy and 1500 Gy caused full elimination of stage 3. Moreover, pollen-tube growth at high doses 1200 Gy and 1500 Gy proceeded with the same speed without any signs of its acceleration or slowing. Absence of second enhancement of pollen-tube growth at high radiation doses gives insight in mentor properties of gamma-irradiated pollen which promotes incompatible pollen growth in pistil and let it invade embryo-sacs in first turn. In addition, it’s worth mentioning that high radiation doses caused pollen tips rupturing and issuing of pollen cytoplasm outwards. 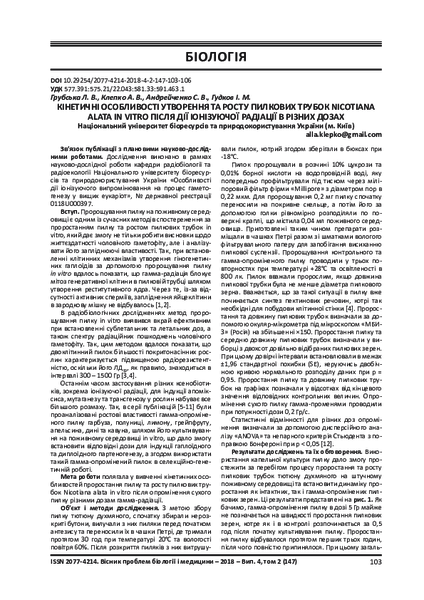