Bulletin of problems biology and medicine / Issue 4 Part 2 (147), 2018 / DYNAMICS OF INDICATORS OF CELLULAR IMMUNITY OF INDIVIDUALS IN THE CONTAMINATED TERRITORIES OF THE SUMY REGION
Віlokur D. O.

We researched changes in the indices of the systemic immunity cellular level in persons from contaminated territories of the Sumy region. The purpose of our study is to establish the dynamics of indicators’ changes of the cellular part of systemic immunity of individuals from contaminated territories of the Sumy region. Methods and materials. The examined were divided into two groups: residents of radiation free areas (control group, 80 persons) and the inhabitants of the areas of enhanced radiation monitoring (experimental group, 80 persons). Indicators of cellular immunity were determined by immunophenotyping and dyeing on RomanowskyGiemsa. Results and their discussion. The relative number of lymphocytes is within the clinical norm and in 2016 is close to the values of the control group. In 2017, this indicator shows a tendency to increase according to the values of both the control group and the experimental in 2016 (by 27,3% and 22,5%). Indicators of the total number of lymphocytes in the control and experimental group are within the clinical norm. At the same time, in 2017 in the research group there is a tendency to increase this indicator according to the values of both the control group and the experimental in 2016 (by 11,3% and 21,9%). We established that the inhabitants of the territory of the intensified radioecological control of the Sumy region in 2017 observed: a tendency to increase the absolute and relative number of CD3-lymphocytes in the experimental group during the study period (1,42 and 1,15 times respectively); an increase in the absolute number of CD8lymphocytes in the experimental group by 1,5 times over the period 2016-2017. In 2017, the immunoregulatory index (IRI) tends to decrease (to the lower limit of the clinical norm) as compared to the control group’s indicators in 2016-2017 years (in 1,3 times), and with respect to the indicators of the experimental group in 2016 (1,24 times). Conclusions. Thus, by investigating the indicators’dynamic of cellular immunity of individuals in the contaminated territories of the Sumy region (density of soils contamination by isotopes of cesium-137 from 1 to 5 Ki/km2), results have been obtained indicating the functional load of this link (due to the tendency to increase absolute and the relative number of T-lymphocytes of all subpopulations (CD3, CD4, CD8), as well as the decrease of IRI by 19.5% and 23%, respectively, of the experimental (in 2016) and control (2017) groups. Prospects for further research. The obtained results point to the necessity of studying the compensatory mechanisms of the immune system and their potential in providing an effective integrative activity of the human body. At the same time, they indicate the need for immunological surveys for the population in the territories of the intensified radioecological control of our state (and in particular, in Sumy region) with the aim of developing and applying immunorehabilitation measures for this category of population. 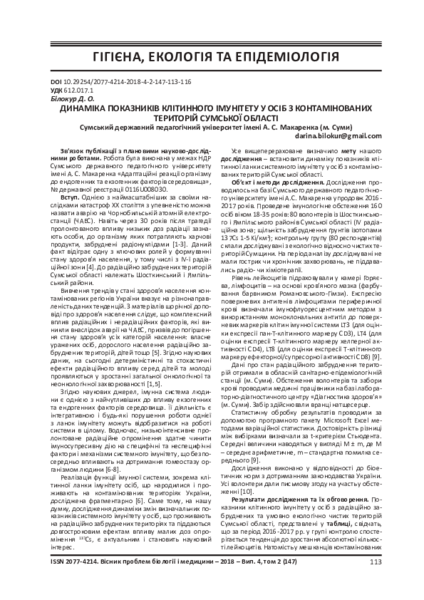