Bulletin of problems biology and medicine / Issue 4 Part 2 (147), 2018 / IMPROVEMENT OF METHODS FOR THE AEROALLERGIC SITUATION FORECASTING WHICH IS CAUSED BY RAGWEED POLLEN IN ZAPORIZHZHYA
Maleeva G. Y., Prykhodko O. B., Yemets T. I.

In recent years, scientists from many countries have paid considerable attention to the monitoring and forecasting of the aeroallergic situation. Their main purpose is to reduce the risk of allergic reactions in the population caused by pollen of anemophilic plants. Now one of the most dangerous and aggressive anemophilic plant is Ambrosia. Its pollen on the scale of allergenicity has 5 points – the maximum level. That is why it is very important to control the factors of seasonal allergy and to build a system of preventive measures that will help to awoid the risk of hay fever developing caused by Ambrosia pollen. However, in order to correctly and more accurately prediction the aeroallergic situation caused by ragweed pollen, it is necessary to take into account the influence of various meteorological factors on the change in the number of pollen grains in the atmospheric air. The aim of the study. To improve the methods of forecasting and prevention of aeroallergic situation caused by Ambrosia pollen. The objects and methods of research. The object of the study was the dynamics of Ambrosia pollen concentration in the atmospheric air of Zaporizhzhya. For pollen sampling we used hand-made volumetric spore tap prototype of which vas sampler of the Hirst design. A scotch tape is wound up around the drum and catches the particles. The drum has to be changed every 7 days. The scotch tape is cut into daily sections, which are transferred to microscopic slides. We analyzed samples routinely by the means of a light microscope at magnifications × 40 using vertical transvers reading method. Observation results were processed using the STATISTICA® for Windows 6.0 licensed software package. Research results and their discussion. We used data of pollen monitoring in our city from 2006 to 2016. The dependence of maximal pollen concentrations on meteorological conditions was revealed. An algorithm for prediction of a dangerous aeroallergic situation was developed. An algorithm based on a comprehensive analysis of meteorological changes taking into account the potential of ragweed plants. The correlation coefficient between the amount of airborne amber dust pollutants and pollutant emissions in 2017 was 0.53, and in 2018 it was 0.66. In 2018, most peak concentrations were predicted correctly. But in early August the pollen concentration in the atmospheric air was very low. The increase was observed only after the 20th of August. The highest concentrations of ragweed pollen were recorded on September 6-7, when the amount of pollen is usually reduced. Comparing these data with meteorological conditions, it can be noted that the year 2018 was abnormal. The hot and quiet weather in August, along with the strong winds of the eastern direction in early September, did not coincide with the prediction algorithm settings. During this pollination period we saw an increase in the number of patients due to the presence of more Ambrosia pollen in the air of our city than in previous years. But it should also be noted that in the overall pollen spectrum, the proportion of ragweed decreases, which proves the effectiveness of this plant control methods. Conclusion. The correlation between the Ambrosia pollen forecasting in the air of Zaporozhye and the available quantity was 0.66. In September there was an unpredictable increase in the amount of pollen, which was due to abnormal weather conditions in August and September this year. In the overall pollen spectrum of Zaporizhia, the proportion of ragweed decreases, which indicates the effectiveness of the measures taken to destroy this quarantine plant. 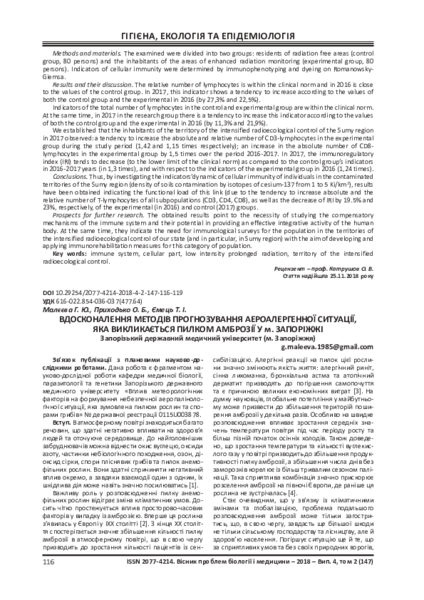