Inflammatory diseases of reproductive organs – one of medical issues of the day, that substantially influences on a health women of genital age. On this time growth of diseases of reproductive sphere is marked for women, caused the mixed infection. A mix-infection – it total nosotropic influence of a few pathogens not simply, but result them difficult co-operating with forming of new microbiocenosis. The associated infections make already presently no less 30% in the structure of infectious diseases of lower department of sexual ways, that an infectious process, caused a few pathogens, appears for every third patient. Possibly patients with mix-infections anymore, as quite often at the hidden forms of disease to the doctor does not apply. An important role in development of the mixed infections is played by such microorganisms, as Trichomonas vaginalis, Neisseria gonorrhoeae, Chlamydia trachomatis, Human herpesvirus and Human pillomavirus. The transferred exciters are mainly passed a sexual way, rarer – domestic, mainly at using the general objects of hygiene). One of variants of the associated mix-infection there is a TORCH-infection (or TORCH -complex). Large-scale researches, conducted klinicist and microbiologists rotined that medical firmness presented most complication in treatment of patients with different infectious processes, especially mixed etiology. The unjustified overpriced dosage of antibacterial and antiprotozoal is instrumental in it, the therapeutic charts of treatment, which do not take into account co-operation of the appointed preparations in an organism, are wrong neat. A research purpose was a lead through of monitoring of distribution of exciters of mix-infections of reproductive organs of women different age. Research objects were exciters of infections of reproductive organs of women which form associations between itself: Neisseria gonorrhoeae, Chlamydia trachomatis, Ureaplasma urealyticum, Mycoplasma hominis, Mycoplasma genitalium, Trichomonas vaginalis, Human herpesvirus 1, 2 types, Human papillomavirus (VPL) 1, 6, 16 types and mushrooms of sort of Candida. Venous blood of patients and strokes from a vagina, cervikal channel, and necks of uterus, which took a sterile tampon, served as materials for research. For authentication of microorganisms applied microbiological methods (microscopic, kultural), method of polimerase chain reaction (PCR) and immunoferment analysis (ELISE). On the first stage of work there was an investigational structure of the selected exciters of infections of reproductive organs for women. All was analysed 1788 isolates from which positive were 1540 standards. As evidently fungus which were 36,3% appeared in the general structure of exciters the most numerous group from the general amount of positive results. Bacterial and viral exciters were often enough selected (accordingly 23,5 and 15,2%). The protozoa made in all 4% positive results. Pays attention on itself considerable distribution of mix-infections which were found out in 21% infected women. There was the also conducted analysis of specific composition of exciters of different systematic groups. As evidently from the resulted table, the most of analyses (580) were done on the exposure of mycotic exciters of infections, from them 560 were positive (96,5%). Among them was found out Candida albicans 172 standards (30,7%), C. tropicalis – 151 (27%), C. krusei – 118 (21%), C. glabrata – 119 (21,3%). At the analysis of biological material from the organs of genesial highway of women from the protozoa mainly found out Trichomonas vaginalis (61 positive result is from 76 clinical standards). On the second stage of work with method of «MUL’TIPLEKS-PLR» (Real-time) 438 clinical standards were analysed from the genesial highway of women in the presence of mix-infections. From them positive were 321 samples. Most widespread mix-infections were such associations of exciters «C. trachomatis +M. hominis + U. urealyticum» (24,3%); «C. albicans + C. trachomatis» (19,3%) and «C. trachomatis + T. vaginalis» (18,7%). By comparison to the abovementioned mikst infections which entered in the complement of appeared rarer «C. trachomatis + N. gonorrhoeae» (9,3%), «VPL + M. hominis + U. urealyticum» (7,5%), «M. hominis + N. gonorrhoeae» (4,2%) and «VPL + M. hominis + C. albicans» (3,4%). 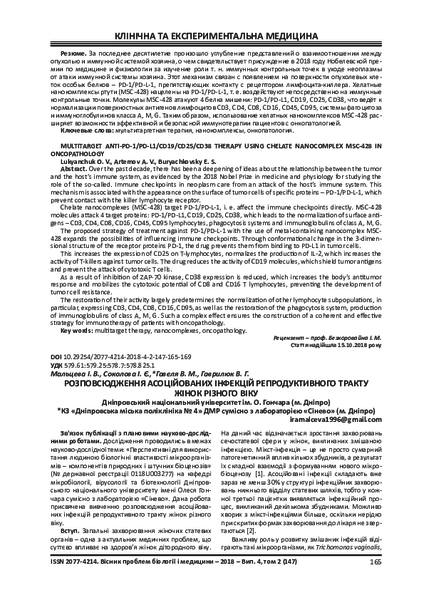